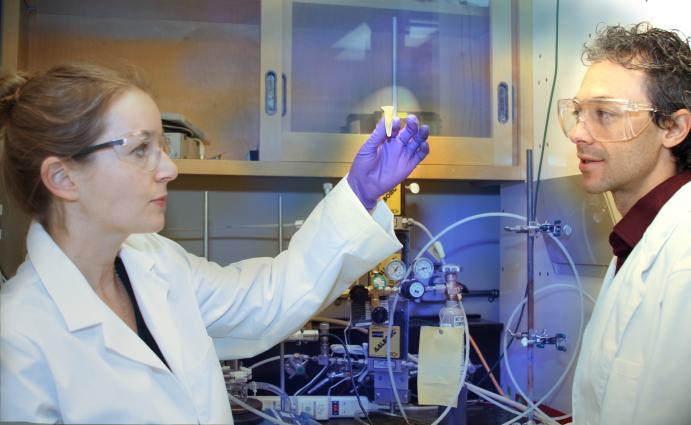 Lawrence Livermore chemist Sarah Baker and engineer Josh Stolaroff examine an enzyme that they plan to use as a catalyst to convert methane to liquid fuel. Photo by Julie Russell/LLNL

In an effort to put to good use natural gas (methane) that might otherwise become pollution, Lawrence Livermore National Laboratory is collaborating with start-up company Calysta Energy on a new technology to convert natural gas to liquid fuel.

"With this technology, we would have a small portable reactor that would convert natural gas to a liquid fuel," said Lawrence Livermore engineer Joshuah Stolaroff, who co-leads the project with chemist Sarah Baker. "The liquid is much more valuable, and transportable, than natural gas in its gaseous form. If the technology works well, it could give the United States a new option for using our large reserves of natural gas."

Biologically engineered enzymes, produced by Calysta, would be used as the catalyst for the conversion to liquid fuel. Enzymes have been used for years in the pharmaceutical industry, however, Stolaroff said their use in the energy sector has been limited.

"Calysta is seeing strong interest from a number of groups in this technology," said Josh Silverman, chief scientific officer and founder of Calysta Energy. "Our main focus is the biological conversion of methane as a route to extracting the most value from one of our most abundant domestic energy resources. We see a unique opportunity in partnering with LLNL to develop game-changing technology to advance the underlying biology."

Silverman said Calysta is interested in the partnership because of LLNL's technical capabilities in nanostructures, reactor technology and 3D printing of substrates in which the enzymes would lie on top.

Most chemical reactions of interest for a better clean energy economy are already routinely carried out in nature. These reactions include the conversion of sunlight to chemical energy, the transfer of carbon dioxide into and out of solution, the selective oxidation of hydrocarbons (including methane to methanol), the formation of carbon-carbon bonds (including methane to ethylene) and the formation and dissolution of silicon-oxygen bonds (including enhanced mineral weathering).

Conventional industrial approaches to mimic those natural processes require catalysts that will work in industrial conditions. Certain enzymes have been identified that carry out each of these reactions with high selectivity under mild conditions -- a specialty of Calysta Energy.

"This presents an opportunity for industrial biocatalysis and biomimetics to fill the gap between current technology and natural capabilities," Stolaroff said. "We identified methane-to-methanol technologies as having an exciting market and environmental opportunity. Catalytic methane conversion at ambient conditions would have an application to the growing shale gas industry and associated methane emissions."

Stolaroff said natural gas mitigation strategies are also needed for a variety of sources, including oil and gas operations, coal mines, agriculture and organic waste, with a range of concentrations and characteristics. The only catalysts available to convert natural gas to other hydrocarbons at ambient temperature and pressure or from low-concentration streams are enzymes in certain type of bacteria.

"Harnessing these enzymes could greatly expand the range of methane sources that would be economic to mitigate and could have additional industrial applications," he said.

The project is funded by the LLNL Laboratory Directed Research and Development (LDRD) program.