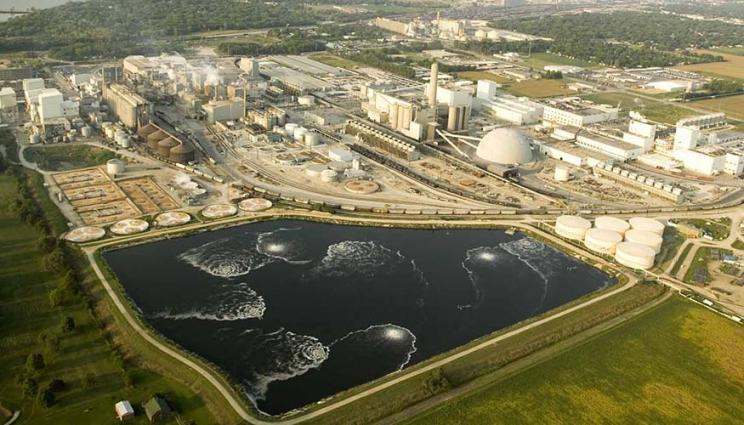 The Illinois Industrial Carbon Capture and Storage (ICCS) project safely and permanently stores more than 1 million tons of carbon dioxide a year. The project captures CO2 from Archer Daniel Midland’s Decatur corn processing facility and stores it almost a mile and a half underground. ICCS is designed to demonstrate carbon capture and storage technology in a saline reservoir at commercial-scale. Image courtesy of Archer Daniel Midland.

To better understand the near-term commercial potential for capturing and storing atmospheric carbon dioxide (CO2), researchers from Lawrence Livermore National Laboratory (LLNL) have mapped out how CO2 might be captured from existing U.S. ethanol biorefineries and permanently stored (or sequestered) underground.

The research appears in the April 23 edition of the Proceedings of the National Academy of Sciences. Researchers from the Carnegie Institution for Science, International Institute for Applied Systems Analysis and Stanford University also contributed to the study.

"Proposed modifications to the California Low Carbon Fuel Standard and recent revisions to existing federal tax credits create a substantial near-term opportunity to permanently sequester biogenic CO2," said LLNL scientist Sean McCoy, one of the authors of the paper. "This financial opportunity could not only spur the growth of Carbon Capture and Sequestratrion (CCS), but also reduce the lifecycle impacts of biofuels we use today, help fulfill mandates for low-carbon fuels in the U.S. and elsewhere, and support development of new carbon-negative fuels."

There are more than 200 existing U.S. biorefineries that emit 45 million metric tons (Mt) of CO2 annually from fermentation. Looking only at the cost of capturing the CO2 – not including building pipelines or sequestering the captured CO2 – the team found that 60 percent of current CO2 emissions (i.e., 27 Mt per year) could be captured for less than $25 per metric ton.

"Ethanol production is one of the least costly known applications of CO2 capture and, to date, the cost of capturing CO2 has been cited as one of the major barriers to CCS," McCoy said.

A credit of $60 per metric ton of CO2 sequestered would be sufficient to cover the costs of capture, transport and sequestration for about 30 million metric tons of CO2 per year. The team estimates this would result in the construction of 4,300 miles of pipelines.

In another scenario, a credit of $90 per metric ton to reduce emissions from ethanol production would result in the capture, transport and sequestration of 38 million tons of CO2 and drive construction of a comparably large pipeline network.

A promising class of technologies for carbon dioxide removal is known as bioenergy with carbon capture and sequestration (BECCS), which involves the capture and permanent sequestration of biogenic CO2 produced during energy conversion. However, most BECCS technologies today, for example gasification with pre-combustion CO2 capture, have not yet been demonstrated at commercially relevant scales.

But capture of biogenic CO2 from fermentation is unique, because unlike many other BECCS technologies, it doesn’t require a costly separation of CO2 and can be applied at existing biorefineries. Practiced commercially for several decades, fermentation of sugars and starch produces more than 26 billion gallons per year of ethanol worldwide. Fermentation also produces a high-concentration (99 percent) gaseous CO2 stream consisting only of CO2, water and small amounts of organic and sulfur compounds. In fact, a U.S. Department of Energy supported project is capturing and storing around 1 Mt per year of CO2 in Illinois.

"The role for CO2 removal envisioned in stringent climate change mitigation scenarios cannot be overstated," McCoy said. "Deploying CCS at existing biorefineries is an important step toward large-scale deployment of BECCS and other removal technologies."

The research was funded by the David and Lucile Packard Foundation, the Alexander von Humboldt Foundation and the U.S. Department of Energy, Office of Fossil Energy.