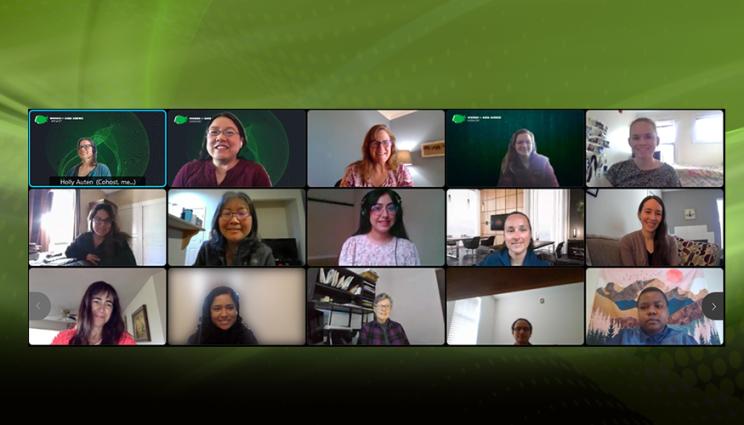 For the fifth time, Lawrence Livermore National Laboratory held a regional event in conjunction with the 2022 Women in Data Science (WiDS) conference on March 7. The all-day event, held virtually for the second straight year, attracted women data scientists and students inside and outside the Lab, who gathered to share coding tips and swap stories of their experiences in growing their careers. Attendees tuned in via Webex to view talks and presentations by LLNL women data scientists, engage in breakout sessions and view a livestream of the Global 2022 WiDS conference hosted by Stanford University.

For the second straight year, the WiDS Livermore event was entirely virtual due to the COVID-19 pandemic. Attendees tuned in via Webex to view talks and presentations by LLNL women data scientists, engage in breakout sessions and view a livestream of the 2022 WiDS conference, hosted by Stanford University. The global conference comprised keynote addresses, technical talks and panel discussions with researchers from academia, government, industry and non-profit organizations.

WiDS, which coincides with Women’s History Month and International Women’s Day on March 8, welcomed more than 100,000 virtual attendees from 99 countries, and included more than 200 events around world. The all-day LLNL event attracted women data scientists and students inside and outside the Laboratory, who gathered virtually to share coding tips and swap stories of their experiences growing their careers.

Budil, who recently marked her one-year anniversary as director, kicked off the event with a fireside chat moderated by Jessie Gaylord, LLNL’s division leader for Global Security Computing Applications. Budil shared her thoughts on women’s empowerment, approach to leadership and her path to becoming director, highlighting transparency, accessibility and the power of networking. She called her directorship the “surprise and honor of a lifetime,” and discussed the challenges she faced along the way.

“There aren’t enough women for us to be a majority of the physics population on the site, so I had to find different ways to build community. And to reach out across the Lab, I had to look across disciplines; I had to find my community in a new way,” Budil said. “For me, a truly diverse environment would either make that extremely easy to do, or unnecessary.”

Budil called diversity, equity and inclusion a “requirement for excellence” in the workplace and addressed the importance of data science at LLNL, specifically how machine learning and artificial intelligence are revolutionizing the Lab’s core mission areas, including high energy density physics and advanced manufacturing — even human resources.

“Increasingly, what we’re learning is that the tools in computer science and real expertise in hardware, software and enabling capabilities are the key to exploiting the computing that we’re going to be putting on-site,” Budil said. “The need for a lab like ours has never been greater, so I’m committed to making sure we don’t miss this opportunity [not only] in our core mission of nuclear deterrence but across the defense space, bio-resiliency, climate and energy. We have a lot to offer, and computing will be at the heart of it.”

Following Budil’s fireside chat, Livermore WiDS Ambassador and LLNL Bioinformatics Group Leader Marisa Torres shared her motivation behind starting a local event and her drive to support women in the field and create a space for women to share how they’ve grown in their careers.

“Our goals are really to sustain this community,” Torres said. “We’ve been isolated these past couple of years, but we’ve still managed to have a very interactive event. But now we want to have further things to celebrate throughout the year.”

Torres pointed to the WiDS-inspired Data Science Institute career panel series and diversity and inclusion panels, and her role representing WiDS as a volunteer with the Girls Who Code program, in which Lab facilitators teach coding to Livermore middle- and high-school students.

“I’m hoping to mentor the next generation of mentors and growing that pool so that, as you participate in these activities, you see more people like you,” Torres explained to attendees. “It is important that we are trying to close the technology gender gap.”

Torres also presented her work building computational models for detecting and responding to novel pathogens including COVID-19, and for drug discovery through the Accelerating Therapeutic Opportunities in Medicine (ATOM) consortium, where machine learning is being used to virtually screen prospective cancer drugs for efficacy and safety. She described the collaboration the work entails, stretching across many Lab disciplines, and how the merging of bioinformatics and biochemistry will require more DevOps and software engineers.

New to WiDS Livermore this year were beginner and applied tracks of technical workshops, where LLNL researchers and others provided insights on data-science techniques for both beginners and advanced data scientists. University of Southern California research assistant professor Gale Lucas presented a basic framework for analysis and data science, and beginner-level attendees broke into small groups, were given a problem and tasked with determining the best analytic approaches.

LLNL computer scientists Olivia Miano and Juanita Ordoñez conducted a walkthrough of the 2022 WiDS Datathon dataset, presenting their submission to the competition and how they applied machine-learning methods to a climate data set to predict energy consumption from building and weather characteristics. In her presentation, WiDS Datathon participant Diana Gerardo, contracted as a statistician at Duke University, explained the process behind her Datathon submission and her experience attending her third WiDS event.

“I’ve listened to all the speakers, the panelists and the livestreams and I found so many other women who have very similar paths to myself,” Ramos said. “It’s been great to chat with different women from different backgrounds who have the same interests and love for data.”

Torres is continuing her work with Data Science Institute career panels and programs, and said she is looking for more Girls Who Code mentors and WiDS ambassadors for the future.

“I’m looking forward to next year,” Torres said. “I’m optimistic that after two years of virtual, we might see each other in person.”

For more on WiDS Livermore, visit the web.