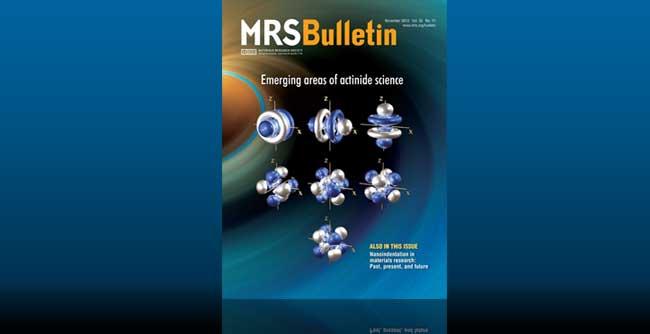 On the cover are calculated 5

electron wave functions. These bonding electrons are the key to exciting materials science, physics and chemistry of actinide elements.

In the issue, actinide materials, which are the backbone of nuclear energy, are examined in respect to the pressing need for carbon-free energy production. Moore said prospects for advanced fuels for next-generation reactors demand a solid understanding of the physical properties of actinide materials, including thermodynamics and quantum mechanics. Six articles give a broad overview of the current state of actinide science, illustrating current advances and emerging areas of interest in this class of materials, and how a fundamental understanding supports nuclear energy.

The actinide series encompasses elements 90-103 (thorium through lawrencium). Though study of these elements has greatly advanced during the past decade, much of the science in this area remains underdeveloped, especially in the elements beyond uranium on the periodic table. There are several reasons: The theoretical tools used to explain and predict a material's behavior are pushed to their limits; and experiments are expensive, with associated risk due to the radioactivity and toxicity of the materials.

However, the growing demand for low-carbon energy sources with output robust enough to power large electric grids, brings nuclear energy to the forefront, according to Moore. He said that Generation IV reactors, which should be up and running in 30 years, require new fuels and closed cycles to eliminate the inefficiencies associated with the current open fuel cycle, which creates significant waste.

"A considerable amount of basic science research and development will be required before they can be made operational," Moore said.

LLNL's Per Soderlind wrote one of the articles titled "Computational Modeling of Actinide Materials and Complexes."

The six articles in the November edition of the Bulletin address a number of these issues.