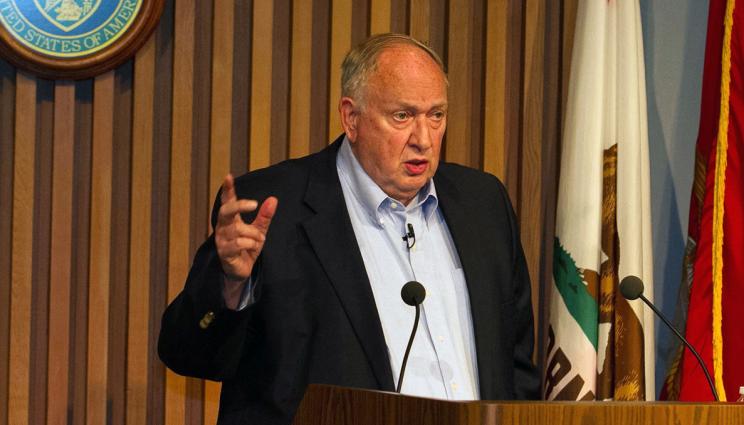 In recognition of his outstanding service to the nation, Linton Brooks has been named the fifth recipient of the John S. Foster Medal. Brooks has served as ambassador for arms control, administrator of the National Nuclear Security Administration and a nuclear submarine officer and is a leader in advancing U.S. national security.

Linton Brooks, ambassador for arms control, administrator of the National Nuclear Security Administration (NNSA) and a nuclear submarine officer, is a leader in advancing U.S. national security and international cooperation for a more secure world. In recognition of his outstanding service to the nation, Brooks has been named the fifth recipient of the John S. Foster Medal.

Established by Lawrence Livermore National Security, LLC (LLNS) and bestowed on an annual basis by the director of Lawrence Livermore National Laboratory (LLNL), the medal recognizes exceptional leadership in scientific technical and engineering development and policy formulation in support of U.S. nuclear security. Instituted in 2015, the inaugural recipient was namesake John S. Foster Jr., former director of LLNL. The 2016 honoree was Gen. Larry Welch (retired), former U.S. Air Force chief of staff; the 2017 recipient was Victor Reis, the architect of the Stockpile Stewardship Program; and the 2018 honoree was John Nuckolls, director emeritus of LLNL.

"I am humbled and flattered by the award of the John S. Foster Medal," Brooks said. "To be associated in any way with a living legend like Johnny Foster is a huge honor. To be cited for a set of characteristics that may or may not be an accurate description of me but are a perfect summary of my aspirations is humbling beyond words. And to have it come from a laboratory with which I have such a long association and for which I have such admiration is frosting on the cake. I thank the selection committee and the Laboratory for such a profound honor."

"Linton Brooks has played a pivotal role in enhancing the security of the United States, advancing new national policy directions and initiatives that have strengthened our national security and reducing global nuclear tensions through the START I and START II treaty negotiations," said Laboratory Director Bill Goldstein. "We welcome him into the ranks of the Foster Medal winners, an honor that recognizes the exemplary work he has performed for so many decades."

Brooks began his career in 1959 serving as a U.S. Navy officer on destroyers, attack submarines and ballistic missile submarines, including commander of the nuclear-powered attack submarine USS Whale. In Washington, D.C., as a naval officer, he held assignments addressing nuclear policy, military strategy, technology, submarine programs and arms control through 1989. From 1986-89, he was director of Defense Programs and Arms Control at the National Security Council, responsible for coordinating U.S. policy on strategic arms reductions, nuclear testing, nuclear weapons safety and security, and stockpile levels.

Between 1989 and 1996, Brooks was the deputy and then head of the U.S. Delegation on Nuclear and Space Talks and Chief Strategic Arms Reductions Treaty (START) negotiator with the Senate-confirmed rank of ambassador. As assistant director of the U.S. Arms Control and Disarmament Agency, Brooks formulated and implemented arms control policy on strategic defenses and theater and strategic nuclear weapons. He supervised the final preparation of the START II Treaty as de facto chief negotiator. Brooks also served as vice president of the Center for Naval Analyses, a Department of Defense-funded R&D center, from 1993 to 2001, and as Senate-confirmed deputy administrator for Nuclear Nonproliferation at NNSA through 2002.

From 2002-07, as administrator of the NNSA and under secretary of Energy for Nuclear Security, Brooks supervised 37,000 employees carrying out the national security responsibilities of the Department of Energy, which include maintaining the safety, security and effectiveness of the nuclear deterrent through the Stockpile Stewardship Program, overseeing naval nuclear propulsion and furthering nuclear nonproliferation and counterterrorism. Since 2007, Brooks has been active as an independent national security consultant, participating in international discussions, serving on federal advisory panels, advising the national laboratories and mentoring the next generation of nuclear policy analysts.

Brooks has received many other honors and awards. He received his bachelor’s degree in physics from Duke University and a master’s degree in government and politics from the University of Maryland. He is a distinguished graduate of the U.S. Navy War College.

Brooks will receive the John S. Foster Medal at a ceremony in the fall.