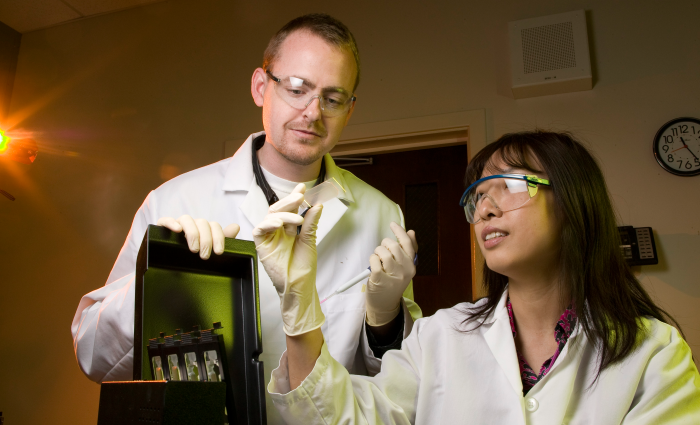 LLNL biologists James Thissen and Crystal Jaing along with researchers from Kansas State University found that the Microbial Detection Array could help identify diseases in the commercial swine industry.

Many of the diseases affecting the commercial swine industry involve complex syndromes caused by multiple pathogens, including emerging viruses and bacteria.

One pivotal advantage of the Livermore-developed LLMDA over other detection technologies is that it can detect within 24 hours any bacteria or virus that has been previously sequenced.

Using 180,000 probes, the current version of the LLMDA has the capability to detect approximately 8,100 microorganisms, including 3,855 bacteria and 3,856 viruses.

"I call the LLMDA the ‘everything test,’ " said Raymond "Bob" Rowland, professor of diagnostic medicine and pathobiology at Kansas State’s College of Veterinary Medicine. "It’s really the future of diagnostics for both humans and animals."

New infectious diseases in animal food production systems can create enormous impacts that can affect domestic consumption and exports, as well as public health in the case of diseases that can move from animals to humans, the paper’s authors wrote.

"The best assurance for the timely identification of known and unknown threats is to employ techniques that can detect endemic, emerging and foreign animal diseases using a single test," Rowland said.

Currently, polymerase chain reaction (PCR) assays represent one technology widely used for pathogen detection, but typically only a handful of microorganisms can be identified in a single test.

Another method of detecting pathogens, DNA sequencing, greatly expands the number of microorganisms that can be identified, but the technique can be lengthy with costly procedures and requires significant expertise.

In their paper, the authors noted that as the LLMDA technology’s cost decreases and throughput increases, it becomes feasible to look at microarrays as everyday tools for use in the diagnostic laboratory.

"The beauty of the LLMDA is that it lets you identify unknown diseases that the researcher isn’t looking for," Jaing said.

"They bring the high-end technology and we bring the practical, real-world application. Typically, these tools are used to identify new organisms, but we recognize in food animal health that many of our problems are complex and polymicrobial.

"These multiple bacteria and viruses end up in a disease syndrome. We’re looking at a complex situation and we need the tools that can give us a comprehensive look at the disease factors involved."

The Kansas State University-Livermore collaboration is viewed as a strategic partnership by Rowland, who sees the LLMDA as potentially being useful for cattle and poultry diagnostic tests, as well as for pets, such as dogs and cats.

During their yearlong study, LLNL and Kansas State researchers evaluated known and unknown microbes in blood, oral fluid and tonsils from pigs that have co-infections of porcine reproductive and respiratory syndrome virus (PRRSV) and Porcine circovirus-2 (PCV-2).

The oral fluid samples worked well, with the LLMDA detecting other signatures for several swine-associated bacteria, including Streptococcus, Clostridium and Staphylococcus.

"The use of the microarray technology could help the U.S. detect the emergence of foreign animal diseases at their outset to prevent major disease outbreaks," Jaing said.

Since its introduction in 2010, the LLMDA has had successful proof of concept demonstrations for a number of areas, including clinical medicine, food safety testing, environmental monitoring and biodefense.

In addition to Jaing and Rowland, other co-authors on the paper are biologist James Thissen, bioinformaticists Shea Gardner and Kevin McLoughlin, all of LLNL; veterinarian Pam Hullinger, of LLNL and the University of California, Davis School of Veterinary Medicine as its Large Animal Clinic director; and biologist Nicholas Monday and veterinarian Megan Niederwerder, both of Kansas State.

The collaboration with Kansas State started in the fall of 2013 under a LLNL Laboratory Directed Research and Development project to develop next-generation diagnostics for detecting agricultural pathogens.

Lab technologies continue to protect the nation against explosives, radiological and nuclear terrorism