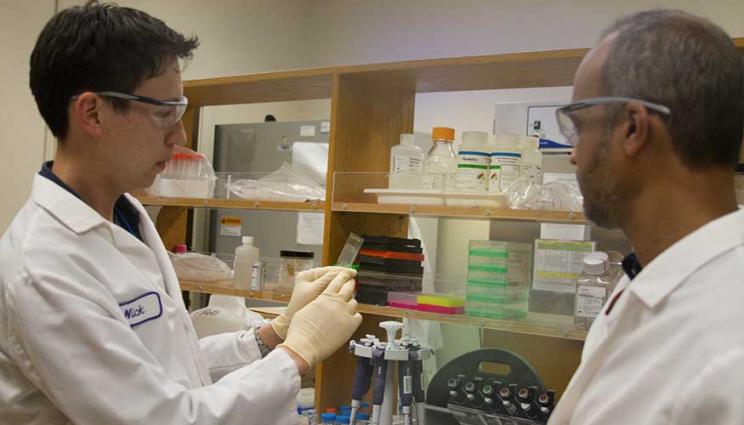 A biological detection technology developed by Lawrence Livermore National Laboratory scientists can detect bacterial pathogens in the wounds of U.S. soldiers that have previously been missed by other technologies.

This advance may, in time, allow an improvement in how soldiers' wounds are treated.

In a three-year study by LLNL and four other institutions, the researchers used the Lawrence Livermore Microbial Detection Array (LLMDA) to detect at least one bacterial pathogen in about one-third of wound samples in which no bacteria were detected using the standard culture method.

"The culture-based methods currently being used to measure infection often do not detect bacteria that are difficult to grow in the lab," said Nicholas Be, an LLNL biomedical scientist and postdoc, who is the paper's lead author.

It is hoped that with more effective and timely diagnosis of wound infections the door could be opened for more personalized medicine that could improve treatment, accelerate rehabilitation and cut the length of hospital stays, Be added.

The study has been published online in the Journal of Clinical Microbiology, a publication of the American Society for Microbiology, and will be included in the journal's July print edition.

Other institutions whose researchers participated in the study were: the Naval Medical Research Center and Walter Reed Army Institute of Research, both of Silver Spring, Maryland; the Uniformed Services University of the Health Sciences, of Bethesda, Maryland; and the University of California, Davis. This collaborative effort was primarily funded by the Defense Medical Research and Development Program.

"A decade of conflict has resulted in the lowest mortality rate in the history of conflict despite an increasing injury severity.  As a result, the injury patterns that we are presented with are among the most complex and challenging seen in modern medicine," said Dr. Eric Elster, professor and chairman of the Uniformed Services University's Department of Surgery.

"The treatment of infection in these patients requires innovative care. Studies such as this one will allow us to better understand the interaction between the body and pathogens, and develop new treatment strategies."

Paul Luciw, a virologist at UC Davis, pointed to the research, which evaluated 124 wound samples from 44 soldiers injured in combat in Iraq and Afghanistan, as a unique study.

"Based on a robust collaboration between basic and clinical researchers, this work is unique because it comprehensively analyzes the diversity of microorganisms in traumatic wounds. A detailed understanding of the composition of microbes at the site of injury has the potential to impact clinical treatment of combat wounds," Luciw said.

Developed by Livermore scientists, the LLMDA contains 180,000 probes that are capable of detecting within 24 hours any bacteria or virus that has been previously sequenced. The current array version has probes for about 8,100 microorganisms, including 3,855 bacteria and 3,856 viruses.

One of the study's key findings is that detection of certain bacteria, such as Pseudomonas species and Acinetobacter baumanni i, which are common hospital-related infections, are associated with wounds that did not heal successfully.

Bacteria that are often related to the gastrointestinal system, such as E. coli and Bacteroides species, were detected and these bacteria are associated more frequently in wounds that did heal successfully.

"Wound microbes are unique to each patient," Be said. "The use of advanced detection technologies could provide clinicians with valuable information during treatment. In particular, information on the presence of specific bacteria that more significantly impact the success of the healing response could guide therapy and allow for more accurate prediction of outcome."

One of Be's co-authors, LLNL biologist Crystal Jaing, believes that the Lab's microbial detection array also could have applications in the civilian medical world.

"Our technology could be helpful to doctors treating burns with large surface areas, people injured by trauma or people with diabetic ulcers," Jaing said.

In addition to Be and Jaing, other LLNL co-authors on the paper are computer scientists Jonathan Allen, Shea Gardner and Kevin McLoughlin.