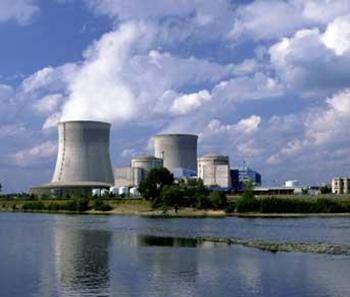 Lawrence Livermore researchers are studying how spent nuclear fuel generated at nuclear reactors could be used as another source of energy.

Anne M Stark, stark8 [at] llnl.gov, 925-422-9799
Lawrence Livermore scientists have modeled actinide-based alloys, such as spent nuclear fuel, in an effort to predict the impact of evolving fuel chemistry on material performance.

This work, funded by a Laboratory Directed Research and Development Program on "Scientific Basis for Ultra-high Burn-up Nuclear Fuels," could have direct implications for the use of spent nuclear fuel as another source of energy.

Despite the limited availability of experimental thermodynamic data, this new approach can predict important features contained in phase diagrams, namely phases and their stability in composition-temperature domains and microstructures, and more importantly, guide and motivate further experiments for validating the methodology and the data for subsequent modeling of materials performance at higher scale, according to Patrice Turchi, lead author of a review paper appearing in the March issue of the Journal of the Minerals, Metals & Materials Society(JOM).

The development of sustainable nuclear energy is critical to the energy security of the United States. And the next generation of nuclear reactor strategy involves preserving nuclear fuel resources, minimizing waste, and enhancing proliferation resistance. Today, only a small fraction of the enriched uranium that is used to fuel the U.S. fleet of more than 100 civilian reactors is actually converted to fission energy; the remaining material is identified as spent nuclear fuel (SNF) and, rather than being considered for its potential energy, is considered as waste. The technical issue thus falls to that of the breeding of plutonium (Pu) from the 238 uranium (U) that constitutes the major component of the SNF. The burning of Pu and minor actinides (MAs) raises the challenge of the lack of knowledge about the complex material itself, namely a mixture of U, Pu and other MAs such as neptunium, americium and curium, and their interaction with oxygen (in the case of oxide MOX fuels) or transition metals such as zirconium or molybdenum (in the case of metal fuels) and the cladding materials as well.

The Livermore team, which consists of Turchi, Per Soderlind and Alexander Landa, has been trying to do just that through thermodynamic modeling of complex multi-component actinide-based alloys with input from state-of-the-art ab initio electronic structure energetics; systematic modeling that is crucial for fuel development, and for identifying trends in fuel behavior; and predicting the impact of evolving fuel chemistry on swelling, resistance to irradiation, fission gas management and thermal properties.

"We need to combine experiments that rely on modern characterizations with advanced theory, simulation and modeling to accelerate, beyond the 20 years commonly agreed upon now, new fuel and reactor development and qualifications in support of U.S. energy security," Turchi said. Hence the goal of the research is to create the fundamental scientific basis for the complex evolution of advanced nuclear energy fuel systems driven far from equilibrium, and to improve fuel development and qualification process to enable rapid, cost-effective decisions from a fully validated and integrated science-based platform.

"This is an "ideal to real" strategy for the development of the next generations of advanced nuclear energy systems," Turchi said. "The predicted thermodynamic driving forces can be used as input for upper-scale modeling, and in particular with coarse-grained phase-field modeling, to study the impact of microstructure evolution on nuclear fuel behavior and performance under normal and accidental conditions."