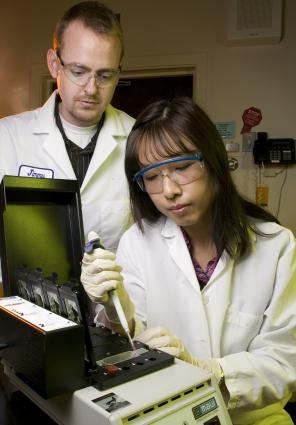 Known formally as the Lawrence Livermore Microbial Detection Array (LLMDA), the technology could enable food safety professionals, law enforcement, medical professionals and others to detect within 24 hours any virus or bacteria that has been sequenced and included among the array's probes.

Developed between October 2007 and February 2008, the LLMDA detects viruses and bacteria with the use of 388,000 probes that fit in a checkerboard pattern in the middle of a one-inch wide, three-inch long glass slide.

The current operational version of the LLMDA contains probes that can detect more than 2,200 viruses and more than 900 bacteria.

The LLMDA provides researchers with the capability of detecting pathogens over the entire range of known viruses and bacteria. Current multiplex polymerase chain reaction (PCR) techniques can at most offer detection from among 50 organisms in one test.

The Livermore team plans to update probes on the array with new sequences of bacteria, viruses and other microorganisms from GenBank and other public databases about once per year, in addition to using sequences obtained from collaborators for their probes.

A computer scientist and the team's leader, Tom Slezak came up with the idea for the LLMDA in 2003. Slezak is one of 10 LLNL researchers named in February as a Laboratory Distinguished Member of the Technical Staff. His team includes biologist Crystal Jaing, who leads the microarray lab work and manages the collaborations; bioinformaticist Shea Gardner, who designed the array; biostatistician Kevin McLoughlin, who designed the analysis software; and James Thissen, who performs the microarray experiments.

MOgene has been in the genomics service business since 2004 and has worked with many pharmaceutical and agricultural businesses, along with universities, around the world.

Pinpointing the effects of nanoconfinement on water