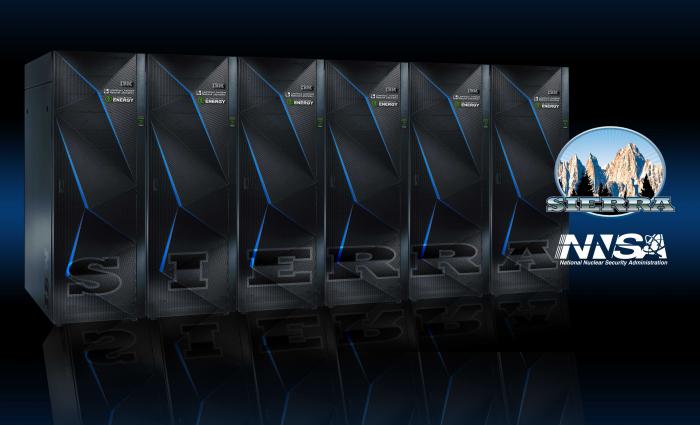 As part of Lawrence Livermore National Laboratory's Center of Excellence, Sierra will be the next supercomputer to be delivered to the Lab in 2017.

IBM, along with NVIDIA and two U.S. Department of Energy (DOE) national laboratories, today announced a pair of Centers of Excellence for supercomputing — one at Lawrence Livermore National Laboratory and the other at Oak Ridge National Laboratory. The collaborations are in support of IBM’s supercomputing contract with the Department of Energy. They will enable advanced, large-scale scientific and engineering applications for supporting DOE missions and for the Summit and Sierra supercomputer systems to be delivered respectively to Oak Ridge and Lawrence Livermore in 2017. Those systems will be operational in 2018.

As the new supercomputers are being readied for installation, the Centers of Excellence will prepare the way for their optimum use in scientific research in such critical areas as energy, climate research, cosmology, biophysics, astrophysics and medicine, as well as in national nuclear security and other national security interests.

In an era of increasing global competition in high performance computing, the centers are designed to enable DOE’s national laboratories to sustain innovation leadership in science and technology while also driving down energy consumption and costs of computing.

At each of the centers, teams of technologists will gain crucial application perspective that will complement the hardware and software development of Summit and Sierra and will enable application readiness at the time of installation. Early application code innovation, executed in tandem with the system development, allows important two-way feedback between the system developers and the application writers. This will ensure the ongoing system design will correctly and effectively support necessary user applications.

"Application code innovation is a vital component of making sure our facilities are prepared to take advantage of the performance of the new supercomputers," said Michel McCoy, program director for Weapon Simulation and Computing at Lawrence Livermore. "By partnering with IBM and NVIDIA, the Centers of Excellence bring together the people who know the science, the people who know the code and the people who know the machines — ensuring we are innovating across the board so that Sierra and Summit will be primed to achieve their missions for national security and scientific advancement as soon as they’re delivered."

The Centers of Excellence collaborations are uniquely set up to support each of the Oak Ridge and Lawrence Livermore labs’ specific missions. With each, computational scientists from IBM and NVIDIA work closely with the applications scientists from the labs to develop tools and technologies that will optimize codes and achieve the best performance on Summit, Sierra and other general use systems. Together, the teams are developing new ways to think about the programming models, algorithms, applications and computer performance.

"The work accomplished through the Centers of Excellence will be a milestone in our collaboration with the U.S. Department of Energy," said Dave Turek, IBM Vice President of HPC Market Engagement. "Along with NVIDIA, our scientists are ensuring Oak Ridge and Lawrence Livermore are able to get the most out of these revolutionary supercomputers to reach the next level of scientific discovery. In addition, our expectation is that many of the codes that are worked on will find benefit in other sectors of the U.S. economy."

The work of the Centers of Excellence is managed by a technical steering group, which includes participants from IBM, NVIDIA and from Lawrence Livermore, Oak Ridge and Argonne national laboratories. This collaborative approach is designed to ensure that critical applications are able to run on all DOE supercomputers.

Work is under way to update and develop applications that have the potential to shape scientific discovery for years to come.

At Lawrence Livermore’s Center of Excellence, IBM and NVIDIA experts will provide expert knowledge and understanding of the accelerated architecture to assure that national security applications evolve rapidly to support the safety, reliability and security of the nuclear stockpile. These experts also will support efforts in a broad range of computational science areas of importance to national security, for instance biosecurity, energy security and global warming.

Center of Excellence scientists will support development of at least 13 applications for Oak Ridge’s Summit supercomputer. These applications were recently selected through the Center for Accelerated Application Readiness (CAAR) program. The modeling and simulation applications span the sciences, from cosmology to biophysics to astrophysics.

The Centers of Excellence are leveraging current IBM Power Systems and OpenPOWER-based technologies for the required programming efforts, with the first prototype of the advanced supercomputers expected to be available to system developers and application writers in late 2015.