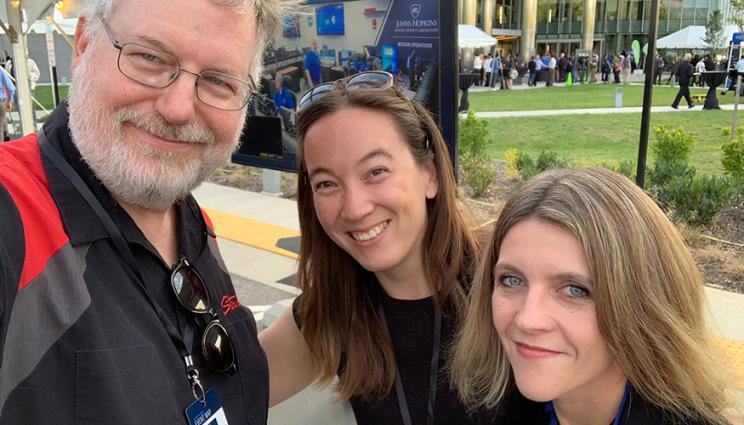 It was a scene right out of the movies.

Bruck Syal along with Mike Owen and Katie Kumamoto watched the final moments in an auditorium, displaying the same live feed of Didymos Reconnaissance and Asteroid Camera for Optical navigation (DRACO) images that the world was witnessing. Since 2015, the team has been supporting DART with impact simulations and analysis and modeling the impact and deflection of the asteroid.

“It was an incredible feeling as the details of Dimorphos’ shape and rubble pile structure became clearer every second,” Bruck Syal said. “The bullseye targeting of Dimorphos by the JHUAPL engineers, who designed the automated targeting software (called SMART Nav), was an amazing accomplishment.”

Changing the course of the asteroid

Owen, developer of the Spheral code, which was used for the mission, said the impact has been a career highlight for him and was the culmination of more than 10 years of work for him.

“We deliberately changed the orbit of a natural object in the solar system; how cool is that?” Owen said. “I didn’t know how you prepare for a day like this. There were many times we were not sure it would happen. The fact we saw Dimorphos for the first time a few minutes before the impact, and up until then we really didn’t know what we were going to be encountering was just crazy.”

Kumamoto said as much as asteroid deflection sounds like something out of a sci-fi movie, this is one of her first research projects with immediate and obvious applications to a real-world problem. “I am pleased and proud that I can contribute to such an important and exciting project,” she said.

“Dimorphos’ surface filled the whole image, at which point the hundreds of people that I was with began cheering: we were going to hit it,” she said. “But the eruption of screams of joy and celebration when we got that final partial frame, which we knew was the signal that the spacecraft had been destroyed, was incredible.”

Bruck Syal said the event has made her nostalgic for when she first started at the Lab as a postdoc, eight years ago.

“I had only been here a few weeks before Paul Miller sent Mike Owen and I to JHUAPL for our first DART meeting in October 2014,” Bruck Syal said. “Paul, as the original lead of LLNL’s planetary defense group, was instrumental in helping us integrate into the DART Investigation Team. His insights and vision helped bring us to this milestone.”

In the two weeks since impact, the team has been receiving data from Earth- and space-based telescopes, along with images from the LICIACube small satellite (deployed from the DART spacecraft 15 days before impact). The most important measurement is the period change to the system, which tells the team how much Dimorphos slowed down with the impact. This period change comes from observations of the light curve of the system, which many telescopes have been measuring both before and after impact.

“Using this final change in velocity, or 'delta-v,' we can scan over many possible assemblages of material properties for the asteroid, to determine what target properties are consistent with the measurement,” Bruck Syal said. “We will be using the final images from the DRACO camera to build a realistic target shape and structure, and implementing high-fidelity models of the DART spacecraft’s geometry."

Owen and Jason Pearl have pioneered new ways of simulating the asteroid’s rubble pile structure, which is critical for this problem. Kumamoto, Pearl and Cody Raskin have worked together to exploit machine learning techniques, to efficiently cover a large input parameter space. Kumamoto’s leadership on a recent DART Inverse Test has positioned her to attack the real data in a structured, sophisticated way. For the next several months, the team will continue to evaluate the data.

The debut of post-impact results will be featured at the American Geophysical Union annual meeting in December, which will include a robust DART session.