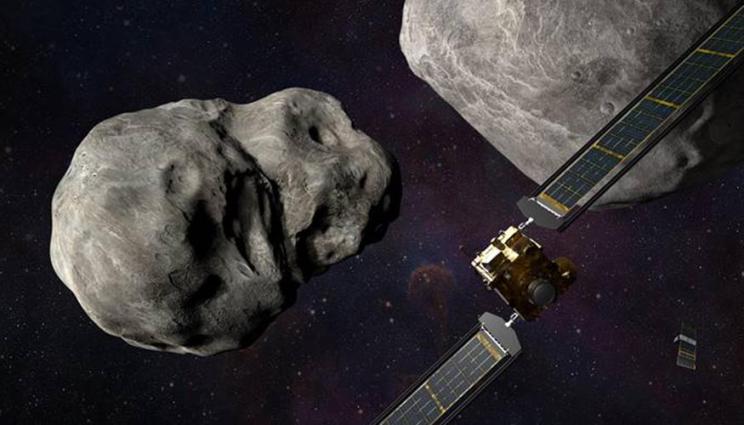 Traveling at ~6 km/s with a mass of ~600 kg, the DART spacecraft will transfer enough momentum for the imparted change in velocity to be detectable from Earth-based telescopes. However, there is significant uncertainty in how the asteroid may respond, due to essentially no prior information about its shape, density, strength and structure. All of these properties affect the impact crater ejecta produced in the experiment, and the ejecta can provide a significant multiplier to the initial spacecraft momentum.

Impact modelers will be faced with the difficult task of using a delta-v and a few final images from DART’s DRACO camera to construct simulations that can be used to infer something about Dimorphos’ material properties.

In order to efficiently cover the search space, machine learning was used to select parameter combinations. This helped focus the search over material properties that were likely to produce a result within the error bars of the targeted delta-v. Ultimately, the Blue Team solutions did include combinations of material properties that were very close to the Truth Simulations. However, there were many possible solutions consistent with the final delta-v, some of which were quite different from the Red Team’s Truth Simulations. One of the largest levers was porosity, because it directly affects the asteroid’s total mass. For example, a lower-porosity asteroid (more massive) with low strength (more ejecta, more push) can end up receiving the same delta-v as a higher-porosity (less massive) and higher strength (less ejecta, less push) asteroid. Solutions within the error bars of the measured delta-v included strengths ranging from a few kPa (sand-like) to more than 100 MPa (competent rock) and porosity from 11% to 60%.

“It is no surprise that this problem is degenerate, since we’re trying to match a set of seven material parameter inputs to the single output of velocity,” says Kumamoto. “But this study is an important step for understanding, and explicitly describing, what we can and cannot constrain or predict about impacting an uncharacterized asteroid.”

Fortunately, the European Space Agency’s Hera Mission is slated to perform detailed reconnaissance of asteroid Dimorphos and its larger companion, Didymos, starting in early 2027. This new inject of information, which should include a more tightly constrained mass for Dimorphos and the DART impact crater size, is anticipated to narrow the range of possible material properties for Dimorphos. However, even if the DART experiment’s target asteroid can eventually be well-constrained, Dimorphos’ properties will not necessarily be representative of future asteroid threats.