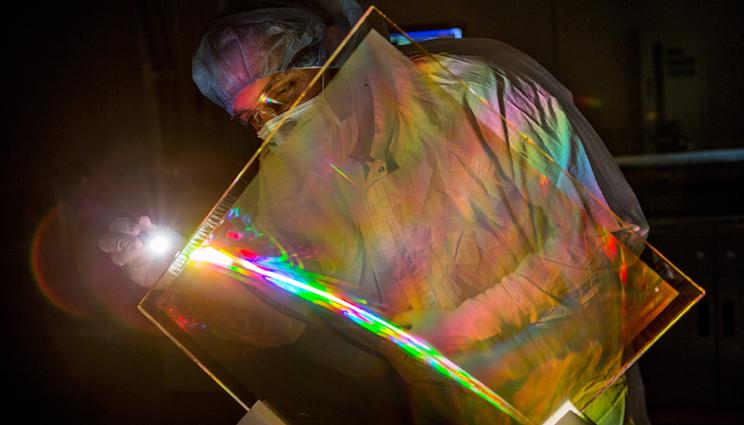 A new anti-reflective coating and a novel chemical process for laser optics, developed by Lawrence Livermore National Laboratory (LLNL) researchers, represents an important breakthrough in its effort to boost the energy of the National Ignition Facility’s (NIF) 192 giant lasers, and cut the cost of repairing or replacing damaged optics vital to its operation.

The coating was developed to overcome energy-robbing reflections from the rear surface of the laser facility’s grating debris shields, or GDS. The GDS is the penultimate optic before NIF’s laser beams enter the target chamber, protecting other optics from the target chamber environment and assisting in diagnosis of the energy of NIF’s laser beams.

A patented chemical process, called the Advanced Mitigation Process (AMP), further protects the optics by making their surfaces more damage resistant by removing impurities and absorbing microfractures. These imperfections, when exposed to laser light, create tiny damage craters on the surface, which grow with repeated laser shots and limit the life span of the optic. Both the AMP process and the coating are required to realize these reductions to the damage rate and the possibility of higher energy on NIF.

These technologies are a result of sustained research and development over the past decade, much of it supported by LLNL’s Laboratory Directed Research and Development (LDRD) program. This effort involved forming a fundamental understanding of the chemistry and physics involved – including isolating and identifying nanoscale absorbing precursors leading to laser damage, understanding the complex laser matter interaction physics and developing novel chemical processes to mitigate them.

"Maximizing the amount of energy and shots reaching NIF targets is a critical factor in the facility’s efforts to serve the needs of its users and Laboratory missions," said Tayyab Suratwala, program director for Optics and Materials Science and Technology (OMST). "By minimizing the damage rate to NIF’s optics, we can save considerable time and expense involved in recycling or replacing optics that become unusable, and thereby increase the number of shots available to experimenters."

NIF is the world’s largest and highest-energy laser system, capable of creating the extreme temperatures and pressures necessary for science-based stockpile stewardship and deepening understanding of the universe. In NIF laser shots, a complex series of optics, including amplifiers, mirrors and wavelength converters, strengthens and guides laser light into the target chamber, where it is focused on miniature targets for inertial confinement fusion and high energy density physics experiments.

The GDS diffracts a small amount of laser light and sends it to a device used to measure its energy, to help researchers balance the laser energy in NIF’s beams as they enter the target chamber. Problematic reflections from this optic ultimately became responsible for much of the damage it experiences, according to Marcus Monticelli, LLNL process engineer lead.

A grating is a diffractive optic that splits light into different wavelengths that travel in certain directions, roughly analogous to the rainbow pattern seen on the back of a compact disc. "These gratings have to be very stable," Monticelli said. "The way to keep it stable, historically, was to leave it uncoated, because the index of refraction of the coating can change with time. That will affect diffraction efficiency significantly, and that would cause power balancing issues on NIF." 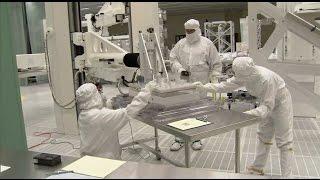 But leaving a fused silica optic like the GDS uncoated results in a penalty in energy: at the 352-nanometer, or ultraviolet, wavelength of NIF’s lasers, 3.7 percent of the laser energy reflects up the beamline from the optic’s exit surface and must be captured by a beam dump so it won’t damage other optics.  "When you’re talking about 1.8 megajoules on NIF in 3 nanoseconds, that’s a very big chunk of power," Monticelli said, noting that researchers have sardonically joked that "the world’s largest laser is NIF, and the world’s second largest laser is the reflection off NIF optics."

Some of this reflected light bounced around in the integrated optics module (IOM) containing the final optics, creating a highly focused beam of light, a focusing "ghost," that was intense enough to damage the IOM’s stray-light-absorbing glass just above the exit surface of the GDS. "Every time we shot the laser," said Jeff Bude, science and technology lead. "It was damaging the IOM and spewing debris all over the GDS."

The debris particles created thousands of potential damage sites on the GDS, many of which, when exposed to NIF’s high-energy laser beams, eventually grew large enough to render the optic useless. "The debris causing damage was limiting the performance of the inherently damage-resistant AMP-treated optic," Bude said. "Understanding and solving this problem was a result of sustained research and development on the impact of various types of debris on laser damage and from novel experiments on NIF and in offline laser test laboratories."

Due to this and other causes, as many as 30-40 optics a week had to be removed from service so that damage sites could be locally repaired through a process known as the "NIF Recycle Loop." The loop is designed to assure that NIF economically operates at maximum energy by limiting the likelihood of damage and acting quickly to mitigate further damage when it does occur.

To solve the reflected-light problems, an LLNL-developed colloidal silica particle coating, made by a sol-gel chemical process, was used on the grating surface of the GDS. These particles were treated with a chemical that modifies the surface, making them more immune to changes in humidity and other environmental factors, and tests showed it was ideal for use as a GDS coating. To accommodate the coatings, the team needed to modify the process for lithographically imprinting the holographic gratings on the exit surface of the GDS optics. Controlled experiments using both standard and coated GDS, combined with other laser improvements such as reducing beam contrast, showed a more than 50-fold reduction in the number of problematic damage sites.

Testing the coated and AMPed GDS began about two years ago. As of March, NIF is about three quarters of the way through replacing uncoated GDS with the new model as the older versions outlive their usefulness. The team predicts that the recycle rate for damaged optics will be cut in half — from 30-40 a week to 10-20 a week — when all the anti-reflective GDS are in place. At the current shot rate, the number of new GDS that will need to be purchased will drop from about 130 a year to about 40, Suratwala said — a significant cost savings.

NIF experiments support the National Nuclear Security Administration’s Stockpile Stewardship Program to ensure the safety, security and reliability of the nation’s nuclear deterrent, while also providing scientists from around the world with unique conditions of heat and pressure for fundamental science studies.

The results of this effort will be published as part of an Optics Express paper later this spring.