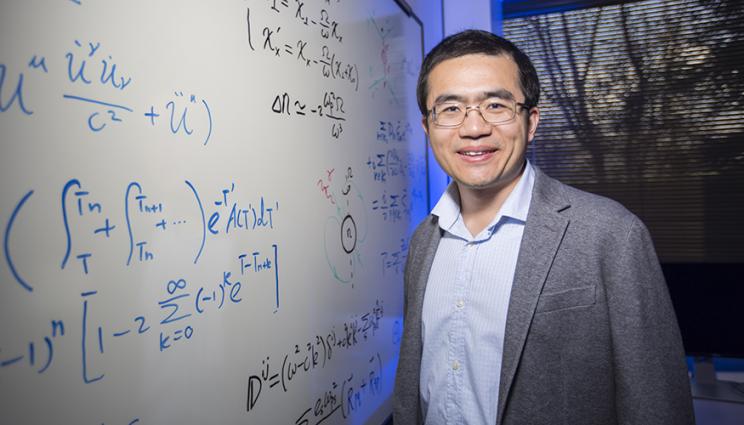 “When I got the award notification, I was surprised and thrilled,” Shi said. “I was surprised because I know of many outstanding theses that weren’t selected for the award. My thesis was finished in 2018 at Princeton University and it wasn’t selected last year, so I wasn’t expecting it to be selected this year either — so it was surprising news when it arrived.”

Shi attributes his success in the field to his Ph.D. advisers, professors Nathaniel Fisch and Hong Qin, “for guiding me through the journey.”

“It is a great honor to be selected for the Marshall N. Rosenbluth award, the highest award a Ph.D. student in plasma physics could expect,” he said. “I’m really happy that the committee recognizes the scientific quality of my work.”

Shi’s thesis, entitled “Plasma Physics in Strong Field Regimes,” was conducted at Princeton University. Based on his new results of the classical plasma model, the role of strong magnetic fields during laser-plasma interactions can now be understood. Moreover, his new quantum electrodynamics (QED) models for plasmas make it possible to understand strong-field QED effects in astrophysical environments and test them in laboratory settings.

Shi’s future research includes extending his thesis topics and bridging them in new directions. His thesis work on magnetized laser-plasma interaction is being extended to modeling conditions relevant to magnetized inertial confinement fusion experiments and also has been expanded to developing plasma photonic techniques to produce, for example, bright quantum light for quantum sensing and communication applications. His work on relativistic-quantum plasmas is being utilized to develop algorithms for quantum computers, which the team at LLNL has successfully implemented recently. In addition, Shi is trying to extend his QED plasma theory to hypothetical particles, which may contribute to the dark matter and dark energy contents of our universe.

Shi earned his bachelor’s degree in mathematics and physics from the University of Hong Kong with minors in chemistry and biology. He earned his master’s degree and Ph.D. in astrophysical sciences, plasma physics program, from Princeton University. There, he did an experimental project on laser diagnostics of Hall thrusters and a computational project on gyrokinetic turbulence, before completing his thesis project on strong-field plasma physics.

Shi is a recipient of the Rosita King Ho Scholarship and the Carl Oberman Fellowship.

The APS award consists of $2,000, a certificate and a registration waiver to give an invited talk on the recipient’s doctoral research at the annual meeting of the APS Division of Plasma Physics (DPP). Shi will receive the award at the awards banquet. This award was established in 1985 (originally as the Simon Ramo Award and formerly as the Outstanding Doctoral Thesis in Plasma Physics Award) and endowed in 1997 by General Atomics Inc.