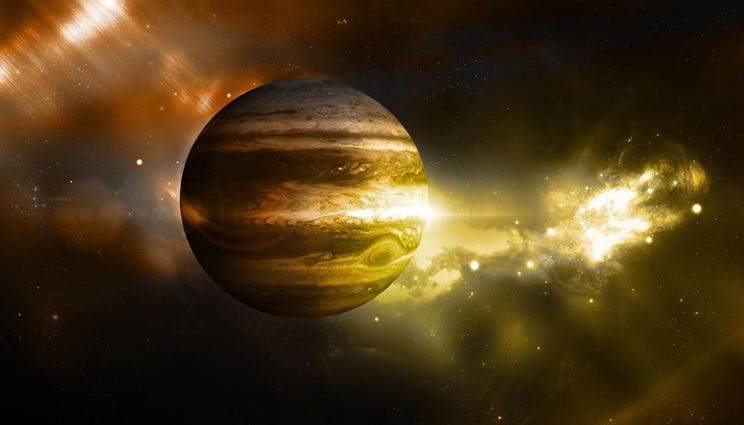 Jupiter is not only the largest planet in our solar system, but it’s also the oldest, according to new research from Lawrence Livermore National Laboratory. Image courtesy of NASA.

An international group of scientists has found that Jupiter is the oldest planet in our solar system.

By looking at tungsten and molybdenum isotopes on iron meteorites, the team, made up of scientists from Lawrence Livermore National Laboratory and Institut für Planetologie at the University of Münster in Germany, found that meteorites are made up from two genetically distinct nebular reservoirs that coexisted but remained separated between 1 million and 3-4 million years after the solar system formed.

"The most plausible mechanism for this efficient separation is the formation of Jupiter, opening a gap in the disc (a plane of gas and dust from stars) and preventing the exchange of material between the two reservoirs," said Thomas Kruijer, lead author of the paper appearing in the June 12 online issue of Proceedings of the National Academy of Sciences. Formerly at the University of Münster, Kruijer is now at LLNL. "Jupiter is the oldest planets in the solar system, and its solid core formed well before the solar nebula gas dissipated, consistent with the core accretion model for giant planet formation."

Jupiter is the most massive planet in the solar system and its presence had an immense effect on the dynamics of the solar accretion disc. Knowing the age of Jupiter is key to understanding how the solar system evolved toward its present-day architecture. Although models predict that Jupiter formed relatively early, until now, its formation has never been dated.

"We do not have any samples from Jupiter, in contrast to other bodies like the Earth, Mars, the moon and asteroids," Kruijer said. "In our study, we use isotope signatures of meteorites (which are derived from asteroids) to infer Jupiter’s age."

The team showed through isotope analyses of meteorites that Jupiter’s solid core formed within only about 1 million years after the start of the solar system history, making it the oldest planet. Through its rapid formation, Jupiter acted as an effective barrier against inward transport of material across the disc, potentially explaining why our solar system lacks any super-Earths (an extrasolar planet with a mass higher than Earth’s).

The earlier theories proposed that gas-giant planets such as Jupiter and Saturn involved the growth of large solid cores of about 10 to 20 Earth masses, followed by the accumulation of gas onto these cores. So the conclusion was the gas-giant cores must have formed before dissipation of the solar nebula -- the gaseous circumstellar disc surrounding the young sun -- which likely occurred between 1 million years and 10 million years after the solar system formed.

In the work, the team confirmed the earlier theories but were able to date Jupiter much more precisely within 1 million years using the isotopic signatures of meteorites.

Although this rapid accretion of the cores has been modeled, it had not been possible to date their formation.

"Our measurements show that the growth of Jupiter can be dated using the distinct genetic heritage and formation times of meteorites," Kruijer said.

Most meteorites derive from small bodies located in the main asteroid belt between Mars and Jupiter. Originally, these bodies probably formed at a much wider range of heliocentric distances, as suggested by the distinct chemical and isotopic compositions of meteorites and by dynamical models, indicating that the gravitational influence of the gas giants led to scattering of small bodies into the asteroid belt.

Other authors include Christoph Burkhardt, Gerrit Budde and Thorsten Kleine of the University of Münster.