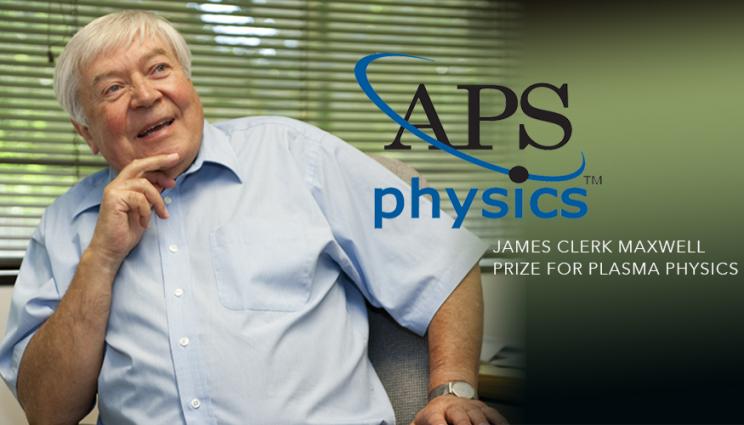 Though Dmitri Ryutov formally retired from Lawrenece Livermore National Laboratory (LLNL) about a year ago, he maintains a close connection to the Lab via his visiting science professional (VSP) status.

And for his work in plasma physics during his 22-year stint at LLNL and previous research at the Budker Institute of Nuclear Physics in Novosibirsk, Russia, Ryutov has garnered the American Physical Society’s James Clerk Maxwell Prize for Plasma Physics.

He was cited "for many outstanding contributions to the theoretical plasma physics of low and high energy density plasmas, open and closed magnetic configurations, and laboratory and astrophysical systems."

"The APS notification about the award came as a complete surprise to me," Ryutov said. "Nobody mentioned to me that something is brewing...The prize is a great honor and I am glad that the citation covers both my results obtained during the first half of my career, prior to me joining the Lab, and during the second half (at the Lab). The Lab was a good home to me."

As a VSP, he regularly attends group meetings at the Fusion Energy Program (tokamak theory) and at NIF (collisionless shocks, a part of the Discovery Science campaign) and contributes to discussions there. He also provides private consulting to a high-tech company, but "in the perception of the external world I am still firmly considered an ‘LLNL guy.’ "

The prize, established in 1975 by Maxwell Technologies Inc., is in honor of the Scottish physicist James Clerk Maxwell and is currently sponsored by General Atomics. The prize consists of $10,000 and a certificate citing the contributions. The prize will be presented at an APS meeting later this year.

Ryutov has a master’s degree in experimental nuclear physics from the Moscow Institute of Physics and Technology and a Ph.D. in plasma theory from the Kurchatov Institute in Moscow.