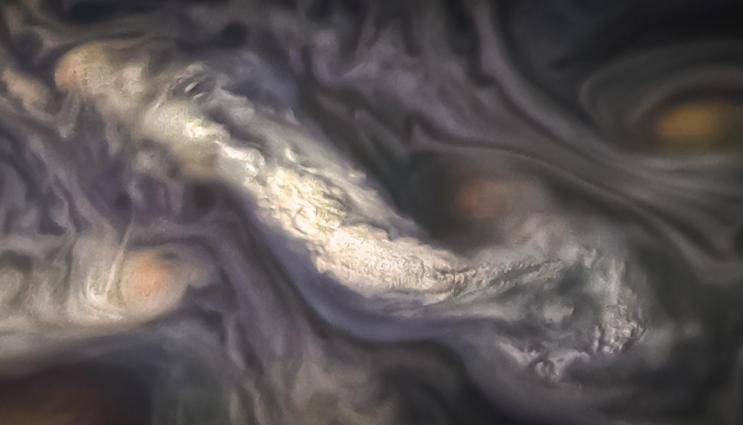 This image captures a high-altitude cloud formation surrounded by swirling patterns in the atmosphere of Jupiter's North North Temperate Belt region. The North North Temperate Belt is one of Jupiter's many colorful, swirling cloud bands. Scientists have wondered for decades how deep these bands extend. Gravity measurements collected by Juno during its close flybys discovered that these bands of flowing atmosphere actually penetrate deep into the planet, to a depth of about 1,900 miles (3,000 kilometers). Image courtesy of NASA

Magnetic fields around a planet or a star can overpower the zonal jets that affect atmospheric circulation.

New research by a Lawrence Livermore National Laboratory (LLNL) scientist and a collaborator from the Australian National University (ANU) provides a theoretical explanation for why self-organized fluid flows called zonal jets or "zonal flows" can be suppressed by the presence of a magnetic field. The research appears today (Aug. 9) in The Astrophysical Journal.

Zonal flows are observed in the banded zones in the atmosphere of Jupiter. Previous work performed simulations that showed a magnetic field suppressed zonal flows. The new research provides a mechanism explaining that suppression. The study shows that with magnetic fields present, even a weak shear flow causes subtle but coherent correlations in the magnetic fluctuations that oppose zonal flows.

"Because magnetic fields are prevalent in the universe, this theory could be important for understanding dynamics at the solar tachocline where a strong magnetic field exists, and also potentially applicable to zonal flows deep in the interior of Jupiter, Saturn and other gas giants," said Jeff Parker, LLNL physicist and coauthor of the paper.

Zonal flows are ubiquitous in rotating systems. Prominent examples include the Earth's polar and subtropical jet streams in the atmosphere, the Antarctic Circumpolar Current in the ocean, the winds in Jupiter's atmosphere and flows in the atmospheres of Saturn, Uranus and Neptune.

The flows act as a barrier and don't allow for fluid from the two sides to exchange properties (such as heat or carbon). Thus, zonal flows have a large impact on the Earth’s weather because they separate cold and warm air.

But just how deep do these zonal jets dive in Jupiter? "The zonal flows have an indirect effect on the gravitational field of Jupiter. With detailed measurements of the gravitational field, we can infer how deep the zonal flows are," said Navid Constantinou, a postdoc at ANU and coauthor of the paper. The recently launched NASA spacecraft Juno is in orbit around Jupiter collecting precisely these sorts of measurements. Preliminary evidence shows that Jovian winds are as deep as 3,000 kilometers (km). This is still "shallow" when compared to the radius of Jupiter (approximately 70,000 km).

"It has been a long-standing question about how deep zonal flows penetrate into the interior of Jupiter and other gas giants," Parker said. "Some have argued they exist only on the surface, and others thought they should persist deep into the planet. Only in the last year are we are starting to get answers to these questions, thanks to Juno. It’s an exciting time. Since magnetic fields prevail within Jupiter’s interior, our research could shed light on why the jets don’t go any deeper."