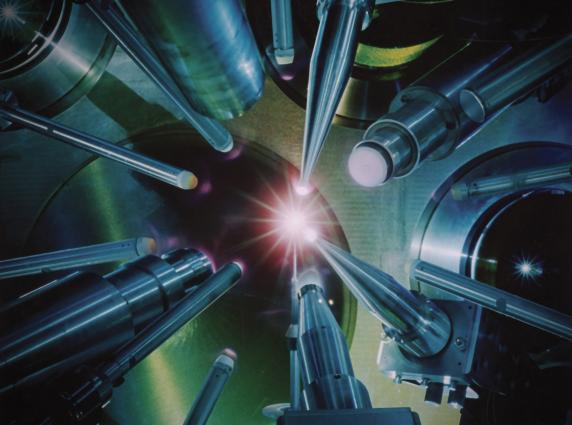 In a series of experiments, Lawrence Livermore National Laboratory researchers used the Omega laser system to compress iron up to 5.6 million atmospheres (5.6 million times the pressure at the Earth's surface), a record pressure for solid iron.

Illustration of the experimental setup on the OMEGA laser. The team achieved a record high pressure for solid iron by multi-shock compression. The properties of iron are diagnosed by XAFS (X-ray absorption fine structure).

In a series of campaigns led by the Lab's Yuan Ping using the OMEGA laser at the Laboratory for Laser Energetics (LLE) at the University of Rochester, researchers compressed iron up to 5.6 million atmospheres (5.6 million times the pressure at the Earth's surface), a record pressure for solid iron.

The record pressure is achieved by multi-shock compression. Using a series of shocks (rather than a single shock) keeps the entropy low while compressing the material, which is the key to keeping the temperature lower than the melting point and allowing the iron to remain solid.

Diagnosing the material properties under extreme conditions is as important as the creation of high-pressure states. The team employed an X-ray technique called EXAFS (extended X-ray absorption fine structure). EXAFS is a powerful tool widely used in material science but its application in materials under extreme conditions is still in its infancy. This work presents the first EXAFS data in high-energy-density (HED) matter.

The EXAFS data show that the close-packed structure of iron is stable in the regime explored, confirming simulation predictions and other experimental studies by X-ray diffraction up to 3 million atmospheres.

Unexpectedly, the team found that the temperature at peak compression is significantly higher than that from pure compressive work. Extra heat is generated by inelastic distortion of the lattice, termed plastic work. It is found that upon fast compression in a few billionths of a second, the strength of iron is enhanced, leading to more plastic work and the elevated temperature.

"It took us more than two years to develop this experimental platform." Ping said. "Now the measurements can be scaled up to larger laser systems, such as the National Ignition Facility, to reach higher pressures or extended to shorter time scale to study dynamics in HED materials."

This work is funded by the Lab's Laboratory Directed Research and Development program.

The team's research appears in the August 9 issue of Physical Review Letters .