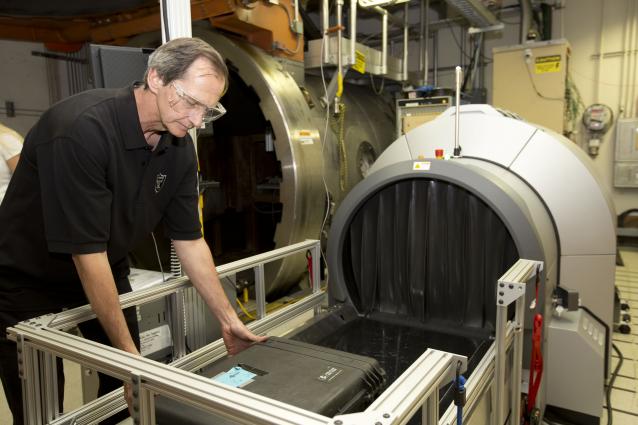 Harry Martz, director of LLNL Center for Nondestructive Characterization, is checking a case used to acquire X-ray signature data on reference standards and explosive specimens after it enters the EDS.  See the 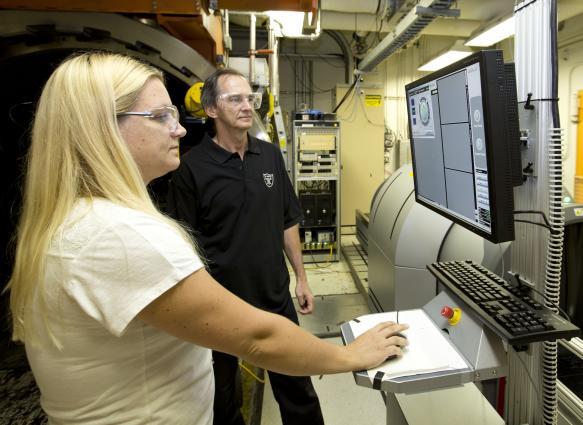 Jennifer Montgomery, the EDS operator, is showing Harry Martz the results from a case that contains reference materials and a water specimen. See the

Each time you step on a commercial flight, you can feel safer because of a researcher you've probably never heard of. His name is Harry Martz. He's a veteran scientist at the Lawrence Livermore National Laboratory (LLNL) who wakes up every day thinking how his research can advance X-ray imaging technology to thwart the next terrorist attack.  See the video .

Plainspoken and passionate, the dark-haired researcher is a transplant from Albany, N.Y. who has been at LLNL since 1986. The Lab has been his one and only career since receiving his Ph.D. in nuclear physics and chemistry from Florida State University. He rose from being a project physicist to his current position as the director for the Center for Nondestructive Characterization in the LLNL Engineering Directorate.

His storied career is a timeline of numerous scientific achievements and awards, highlighted by his work with the Department of Homeland Security (DHS) and its Transportation Security Administration (TSA). His research has led to major advances in airport baggage scanning technology to detect explosive and non-explosive materials that terrorists try to sneak through airport security, as well as the development of better cargo scanning devices at major American seaports.

"My job is to improve national security," Martz said. "That's why my research team exists. We have to outsmart the terrorists. It's a constant battle."

In this line of work, there's absolutely no margin of error. The good guys have to be right 100 percent of the time, while the bad guys have to be right just once. You don't get a more experienced good guy on the national security side than Martz. The modest scientist has made new discoveries in the areas of X-ray imaging, computed tomography (CT) and nondestructive characterization (NDC) research. Most people are familiar with CT in the form of computer-assisted tomography (CAT scans) or CT scans, which provide 3D views of the subject or object being scanned. NDC is the testing and identification of materials that alone are not destructive.

"What Harry is doing is really important to our country," said Diane Chinn, division leader for LLNL's Materials Engineer Division who has known Martz for decades. "He is an extremely thorough researcher. His results impact anyone who travels on a plane."

Robert Sharpe, director of LLNL's Engineering Research and Development, said Martz's unique blend of technical insight, scientific depth and expertise as well as his focus on national security issues, make him one of the most distinguished and impactful technical leaders at the Lab.

Martz's early research success includes designing a mobile CT system to assay thousands of waste drums at Department of Energy (DOE) sites around the country. This technology was transferred to a commercial partner, resulting in an R&D Magazine 100 Award, better known as the "Oscars of Invention" award, for Martz.

The achievement would be the start of what became Martz's trademark of conducting rigorous, advance research to solve complex problems facing the nation. His talents were quickly called upon after the 9/11 terrorist attacks.

TSA, working under the umbrella of the newly formed DHS, spent billions of dollars to bolster airport security by developing better explosive detection systems (EDS) that were based on X-ray CT technology or 3D X-rays. Martz was asked by DHS to advise TSA on this endeavor as well as perform independent analysis and lab testing of potential bomb-making materials. The federal government essentially wanted him to help develop better scanning equipment for checked luggage.

This is how airport CT scanners typically work: Checked luggage goes through a hollow tube while an X-ray source and detectors quickly rotate around it. The scanner uses the X-ray data to generate 3D images of the bag. Based on the tomogram, the device calculates the mass and density of objects inside the bag. A human operator is alerted if an item's mass and X-ray features is within the dangerous materials range. This results in further investigation that sometimes includes a hand search.

Martz and his research team had a CT scanner built at their LLNL lab to investigate homemade explosives and other bomb-making materials. Their research also included developing better protocols for the testing and screening of materials and new algorithms to improve airport scanners' capabilities. TSA- approved vendors developing better scanning equipment for airports throughout the nation used their research results.

The team's research expanded to cargo scanning systems at the nation's ports after the Domestic Nuclear Detection Office (DNDO), a DHS agency, contacted them. They conducted modeling and simulation testing to distinguish everyday metals such as tin, aluminum and steel from special nuclear materials (uranium and plutonium and shielding metals, such as lead and tungsten. In particular, Martz's keen insight on X-ray technology helped design unclassified radiographic benchmarks to test the scanning systems. His team's research results, along with their newly developed algorithms, helped improve cargo scanners to better distinguish the metals.

"Our research program had direct impact on national security," Martz said. "It was very exciting and rewarding. DHS and TSA were pleased with our work"

Outside of his DHS work, Martz was the principal investigator for several LLNL Laboratory Directed Research and Development (LDRD) and TechBase projects that have paved the way for programmatic successes in the Weapons & Complex Integration Principal Directorate and the National Ignition Facility. In the mid-1990s, he led an LDRD project on high-energy X-ray systems and CT algorithm research that has since been used routinely for nuclear weapons inspections.

Over his career, Martz has received nearly $50 million in federal funding from multiple agencies; worked collaboratively with universities such as UC Davis, UC San Diego, Johns Hopkins University and the University of Bologna; published more than 150 scientific articles; and authored three book chapters. In August, Martz was appointed by the National Research Council to serve as the chair of the Committee on Airport Passenger Screening: Backscatter X-Ray Machines. His term will last until November 2014.

As busy as he is, Martz still finds time to mentor young Lab employees and summer students, telling them that the key to being a successful scientist or engineer is good ideas, interpersonal skills and communication. Above all, they must be able to listen, take criticism and not be afraid to fail. "I tell them to be passionate about what they do," Martz said. "Don't be afraid to make mistakes. But make sure you learn from them. Work with the best and the brightest because the smarter they are, the smarter you become."

He may be a celebrated Lab scientist, but Martz -- who enjoys sports, hiking and photography, and lives in Livermore with his wife and two children -- is far from done.

"I am excited and passionate about what I do," he said. "I like solving problems to find a solution or adapting solutions if the nature of the problem changes. I come to work every day wanting to learn something new."