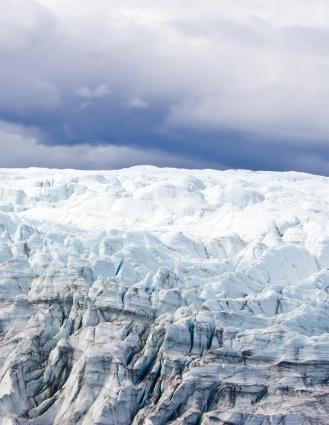 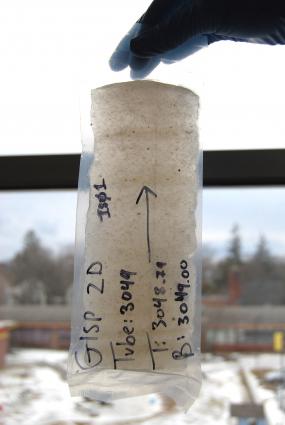 A piece of an ice core shows silt and sand embedded in ice.

At one point in history, Greenland was actually green and not a country covered in ice.

An international team of researchers, including a former scientist from Lawrence Livermore National Laboratory, has discovered that ancient dirt in Greenland was cryogenically frozen for millions of years under nearly two miles of ice.

More than 2.5 million years ago. Greenland looked like the green Alaskan tundra, before it was covered by the second largest body of ice on Earth.

The ancient dirt under the Greenland ice sheet helps to unravel an important mystery surrounding climate change: How did big ice sheets melt and grow in response to changes in temperature?

The research appears in the April 17 edition ofScience Express.

"Our study demonstrates that the ice in the center of the Greenland Ice Sheet has remained stable during the climate variations of the last millions of years," said Dylan Rood, a former Lawrence Livermore scientist. "Our study adds to a body of evidence that shows how major ice sheets reacted in the past to warming, providing insights into what they could do again in the future."

An ancient landscape millions of years old is preserved underneath the Greenland Ice Sheet. The ancient dirt contains extremely large amounts of meteoric beryllium-10, which means that it had to have once sat at Earth's surface for a long time before Greenland was covered in ice. This type of beryllium-10 is produced by cosmic rays in the atmosphere and literally rains out onto the Earth's surface, where it gets stuck to soil.

The more meteoric beryllium-10 atoms in the dirt, the longer it sat at the surface.

"It is amazing that a huge ice sheet, nearly two miles thick and the second largest body of ice on Earth, didn't scrape it away," said Rood, who now works at the Scottish Universities Environmental Research Centre (SUERC).

Rood counted how many beryllium-10 atoms were in the dirt using the Center for Accelerator Mass Spectrometry (CAMS)at LLNL.

"The trick, of course, is isolating the extremely rare beryllium-10 atoms from the million billion beryllium-9 atoms in our samples," Rood said. "I'm always amazed to see how a pinhead-sized sample from dirt can be ionized and accelerated through the maze of beamlines in CAMS and then go exactly where it needs to go in order to allow us to count its individual atoms. The CAMS allows us to count these very rare beryllium-10 atoms, which is analogous to finding the one grain of sand that is different than the rest on a beach."

In the past five years or so, important advances in the ultra-sensitive and high-precision measurement of isotopes using AMS technology have revolutionized the ability of Earth scientists to understand how ice sheets have responded to past climate change.