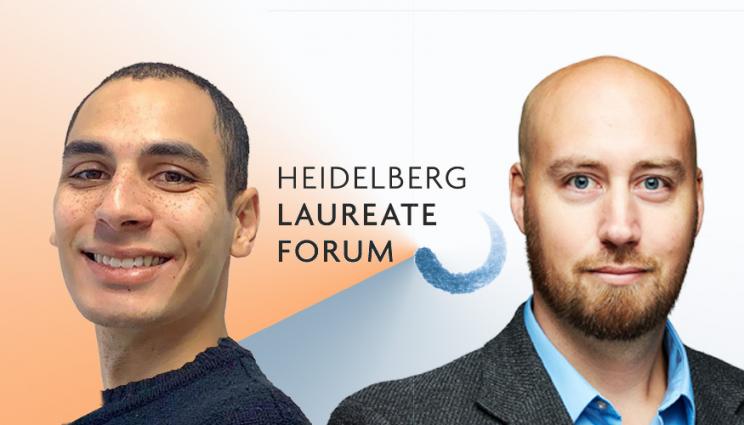 The international Heidelberg Laureate Forum invited Lawrence Livermore National Laboratory computational engineering postdoctoral researchers Felipe Leno da Silva, left, and Ruben Glatt to virtually attend the 2021 conference this September, where they will meet and interact with laureates of the major prizes in mathematics and computer science.

Two Lawrence Livermore National Laboratory (LLNL) postdoctoral researchers are among a select group of 200 scientists invited to attend the 8thHeidelberg Laureate Forum, an international conference that connects young researchers with laureates of the major prizes in mathematics and computer science.

For a week in September, LLNL computational engineering postdocs Ruben Glatt and Felipe Leno da Silva will meet and interact with recipients of the Abel Prize, ACM A.M. Turing Award, ACM Prize in Computing, Fields Medal and the Nevanlinna Prize. It is the second selection for the two researchers; Leno attended in 2018 and Glatt in 2017. Both were selected for the 2020 forum, which was postponed to this year due to the COVID-19 pandemic.

Glatt holds a Ph.D. in computer engineering from the Escola Politécnica of the University of São Paulo, Brazil, and a master’s in mechatronics from the Karlsruhe Institute of Technology in Germany. He focuses his work at LLNL on autonomous agents in multi-agent systems and on general reinforcement learning research. He is chiefly interested in applying machine learning techniques to real-world challenges to drive artificial intelligence (AI) adoption, which he supports through wide community engagement. He also serves as chair of the Lawrence Livermore Postdoc Association and represents the postdocs of the Lab in the Institutional Postdoc Program Board.

“Being selected for the Heidelberg Forum for a second time is a great honor for me,” Glatt said. “I am humbled by the privilege of getting this amazing opportunity to interact with the visionaries that have shaped the course of math and computer science over the last decades. I also feel deeply thankful as I realize that this development wouldn’t have been possible without the help of the awesome people that enabled and backed me on my journey, and I hope I can be such a strong support for others as well.”

Leno’s research at LLNL centers on multi-agent reinforcement learning, investigating how artificial intelligence agents can reuse and share knowledge. He has organized multiple workshops and been involved in program committees for most of the major AI conferences, and is a strong advocate for the inclusion of minorities in the AI community. Leno holds Ph.D. and masters’ degrees from the University of São Paulo, Brazil. He also has helped organize one of the first Brazilian artificial intelligence residency programs while a postdoc at São Paulo’s Advanced Institute for AI.

"Being selected to attend HLF is truly a privilege and a humbling experience,” Leno said. “This is a lifetime opportunity to learn from the laureates who shaped the state-of-the-art in math and computer science, and to network with the distinguished young researchers from around the world. I am really looking forward to representing the Lab at this event."