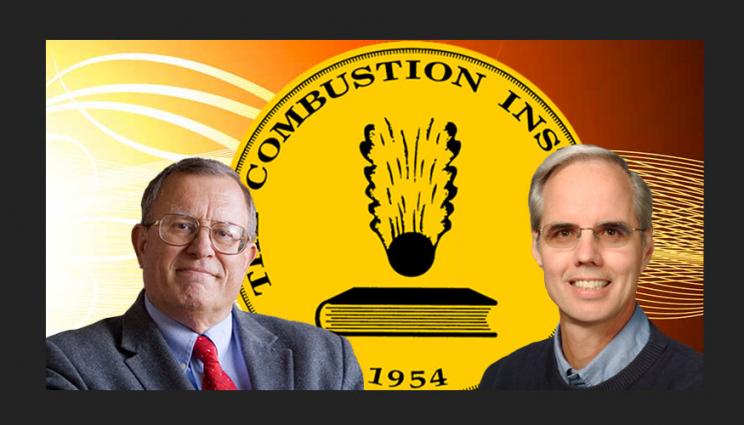 Charlie Westbrook, a retired Lab employee, and Bill Pitz, a combustion scientist in the Lab’s Materials Science Division, have been named fellows of the international Combustion Institute.

Two researchers affiliated with Lawrence Livermore National Laboratory (LLNL) -- a current employee and a retiree -- have been named fellows of the international Combustion Institute (CI).

Bill Pitz, a combustion scientist in the Lab’s Materials Science Division, and Charlie Westbrook, a retired Lab employee, were announced in mid-February as fellows of the institute. They are members of the inaugural class of Combustion Institute fellows and will be recognized at the 37th International Symposium on Combustion in Dublin, Ireland this summer.

"I am very pleased to have been made a fellow of the Combustion Institute," Pitz said. "Charlie and I have been fortunate to work in an area that has drawn much attention over the past 20 years that has allowed us to be recognized."

A 35-year LLNL employee, Pitz was honored for his work to develop chemical kinetics models for fuels that have had a large impact on the simulation of combustion in engines. This is particularly the case because new engines under development are more controlled by the chemistry of the fuel than previous ones.

For three straight years, 2014-16, Clarivat Analytic recognized Westbrook and Pitz as among the most highly cited researchers for papers in engineering, ranking in the top 1 percent.

Westbrook, who mentored Pitz for much of his Lab career, also was named a fellow. A former president of the Combustion Institute from 2008-12, Westbrook retired from the Laboratory in 2005 after an illustrious 41-year career.

"I love puzzles, and that was a wonderful puzzle. High-powered computing helped unravel chemical and engine interactions to explain what engine and fuel companies were seeing experimentally in their labs," he said.

Referring to his selection as a CI fellow, Westbrook noted: "I think I’m like most LLNL researchers who commit themselves to their work to benefit some part of ‘society,’ some in national defense, some in medical research and in my case, in energy-related research.

"Combustion is going to be the main source of the world's energy for a long time, and we need to make it more efficient and reduce its harmful impacts. My current work is on chemistry of fuels from biomass, not just ethanol or biodiesel, but processed biomass from algae, grasses and waste plant material like cellulose and lignin, etc., and the fuels from those sources are much different, chemically, from fuels from petroleum."

Even though Westbrook is retired, he continues to conduct combustion chemistry research, with the advantage of having most of his career on a laptop, with chemical kinetics codes that he can run at home or in his office.

In addition to his selection as a CI fellow, Westbrook also has been elected to the National Academy of Engineering, been named a fellow of the Society of Automotive Engineers and earned the CI’s 2008 Bernard Lewis Gold Medal and the American Chemical Society’s Thomas Midgley Award.

"As a small community, our CI members don’t always get opportunities to be recognized, so the fellows program is an attempt to provide the kind of recognition that can be demonstrated to peers and managers," Westbrook said.

Based in Pittsburgh, Pennsylvania, the Combustion Institute is the international professional society for combustion. The institute has 4,267 members from 33 countries.

According to CI, the fellows program is a recognition by their peers "as distinguished for outstanding contributions, whether it be in research or in applications." No more than 1.5 percent of the CI membership can be elected by nomination in any given year.