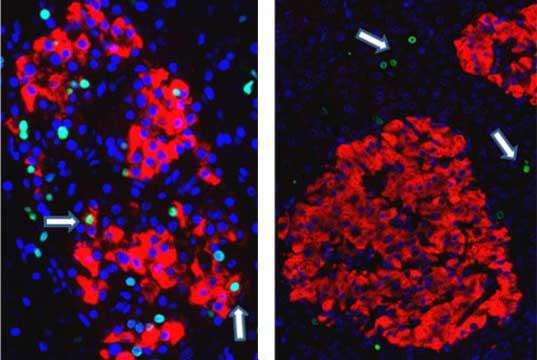 Beta cells, which make insulin in the human body, do not replicate after the age of 30, indicating that clinicians may be closer to better treating diabetes.

Type 1 diabetes is caused by a loss of beta cells by auto-immunity while type 2 is due to a relative insufficiency of beta cells. Whether beta cells replicate after birth has remained an open issue, and is critically important for designing therapies for diabetes.

By using radioactive carbon-14 produced by above-ground nuclear testing in the 1950s and '60s, researchers have determined that the number of beta cells remains static after age 30.

Using LLNL's Center for Accelerator Mass Spectrometry, Buchholz measured the amount of carbon 14 in DNA in beta cells and discovered that after age 30, the body does not create any new beta cells, thus decreasing the capacity to produce insulin as a person ages.

Carbon 14 atmospheric concentration levels remained relatively stable until the Cold War, when above-ground nuclear bomb tests caused a sharp increase, or peak, which decreased slowly after the end of above-ground testing in 1963. This spike in carbon 14 in the atmosphere serves as a chronometer of the past 57 years.

Because DNA is stable after a cell has gone through its last cell division, the concentration of carbon 14 in DNA serves as a date mark for when a cell was born and can be used to date cells in humans.

"We found that beta cells turnover up to about age 30, and there they remain throughout life," Buchholz said. "The findings have implications for both type 1 and type 2 diabetes."

Type 1 diabetes is an auto-immune disease in which the body attacks beta cells. Both genetic predisposition and environmental triggers that are poorly understood have been implicated in the disease development. Disease onset is frequent during childhood but can occur throughout life and requires lifelong insulin injections/pump delivery. The body simply lacks the ability to make insulin. Type 2 diabetes (often called adult onset diabetes) is common in older people whose ability to secrete sufficient insulin to regulate blood sugar deteriorates as they age and is often due to increased demand in obese people.

"It could be due to loss of beta cells with age," Buchholz said. "The body doesn't make new ones in adulthood and there might not be enough cells to control blood sugar."

In addition, as the obesity rate increases, the incidence of type 2 diabetes increases and it is now starting to be found in obese children.

Buchholz said there is active research in stem cell therapies to replace lost beta cells for both types of diabetes. "But with these new findings, it isn't clear how easy it will be to get the body to make more beta cells in adulthood, when it is not a natural process," he said. "At the surface, it seems like coaxing the body to do what it does naturally will be easier to accomplish."