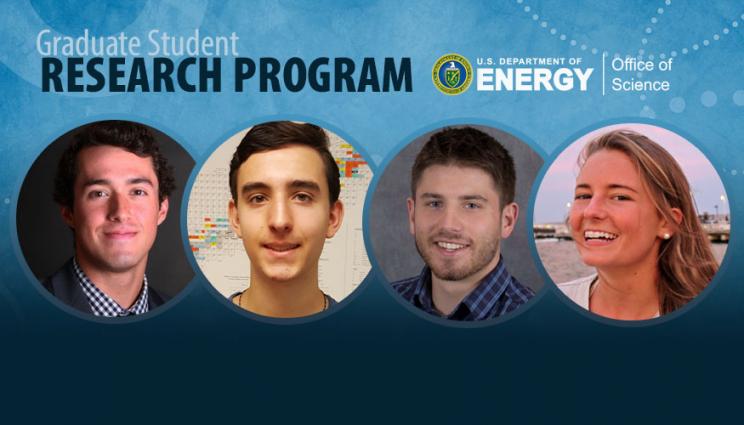 The four graduate students are among 65 individuals representing 29 states who will conduct research at various DOE national laboratories. The students hosted by LLNL include: Connor Bray from Colorado School of Mines; Megan Foley from Northern Arizona University; Connor Ganley from Johns Hopkins University; and Jared Stimac from University of California-Davis.

SCGSR prepares graduate students to enter career of critical importance to the DOE Office of Science mission and secures the national position at the forefront of discovery and innovation.

Bray’s research area focuses on convergence — conservation laws and symmetries. Bray said the SCGSR award will be a critical component of his doctoral thesis by providing access to world-class supercomputing resources and training on the experimental tools necessary to prove the accuracy of the simulations he develops for them. These simulations will provide insight into the most intricate details of their superconducting quantum sensors and will improve the sensitivity of their measurement by up to two orders of magnitude.

“My primary role will be to work with Stephan Friedrich and Geon-bo Kim of the Rare Event Detection Group in order to operate the superconducting detector system and help scale the sterile neutrino search to large detector arrays,” he said. “I also will work with the Quantum Simulations group led by Vince Lordi to improve and scale up my Monte-Carlo simulations to leverage the supercomputing resources at LLNL.”

Foley’s research focus is on metatranscriptomic analysis of soil microbial communities in two distinct below ground habitats: the rhizosphere and the detritusphere. Foley will work with LLNL senior staff scientist Jennifer Pett-Ridge.

“The work I’ll be doing at LLNL is a component of Pett-Ridge’s research that looks at how the traits of microorganisms during their life — and the composition of their necromass after death — matter for how long carbon is sequestered in soils,” Foley said. “Soils are earth’s largest terrestrial pool of organic carbon, so these research questions are driven by their relevance to carbon cycling and climate change.”

Ganley’s research focuses on the concept of multi-scale modeling, or using artificial intelligence techniques to take information calculated at the quantum (atomic) scale and applying it to larger systems and longer timescales.

“One such technique was developed at LLNL by Rebecca Lindsey and her colleagues, and I will be working to further develop this technique and apply it toward more complex and highly relevant systems,” he said. “Most generally, these systems will be materials for renewable energy generation. The SCGSR award is what allows me to collaborate with world-class researchers, like Lindsey and her colleagues, to do meaningful, impactful research.”

Stimac’s focus area is on radiation effects in materials. Stimac was an intern student this year as part of the Computational Chemistry and Materials Science Summer Institute. Stimac said this award is an opportunity to utilize the expertise and computational resources at LLNL.

“My mentor at the Lab, Vasily Bulatov, as well as many other researchers at the Lab, are deeply knowledgeable about the material system we plan to investigate, and they are adept at conducting large-scale molecular dynamic simulations, which will be the methodology of the research,” he said. “The guidance that stems from interacting with those experts will undoubtedly improve the overall outcomes. Moreover, Livermore Computing allows for the simulation of materials on scales far beyond what is capable with the computers available at my home university, extending what can be observed and therefore understood from those simulations.”

Awardees were selected from a diverse pool of graduate applicants from institutions around the country. Selection was based on merit peer review by external scientific experts. Since 2014, the SCGSR program has provided more than 765 U.S. graduate awardees from 153 universities with supplemental funds to conduct part of their thesis research at a host DOE laboratory in collaboration with a DOE laboratory scientist. In this cohort of awardees, four are the first SCGSR awardee to come from their institution, and about 11 percent attend minority-serving institutions (MSIs).

The complete list of the 65 awardees, their institutions, host DOE laboratory/facility and priority research areas of projects can be found here.