The Department of Energy (DOE), National Nuclear Security Administration (NNSA) and Lawrence Livermore National Laboratory (LLNL) today announced the signing of contracts with Cray Inc. to build the NNSA’s first exascale supercomputer, "El Capitan." El Capitan will have a peak performance of more than 1.5 exaflops (1.5 quintillion calculations per second) and an anticipated delivery in late 2022. The total contract award is valued at $600 million.

"The Department of Energy is the world leader in supercomputing and El Capitan is a critical addition to our next-generation systems," said U.S. Energy Secretary Rick Perry. "El Capitan’s advanced capabilities for modeling, simulation and artificial intelligence will help push America’s competitive edge in energy and national security, allow us to ask tougher questions, solve greater challenges and develop better solutions for generations to come." 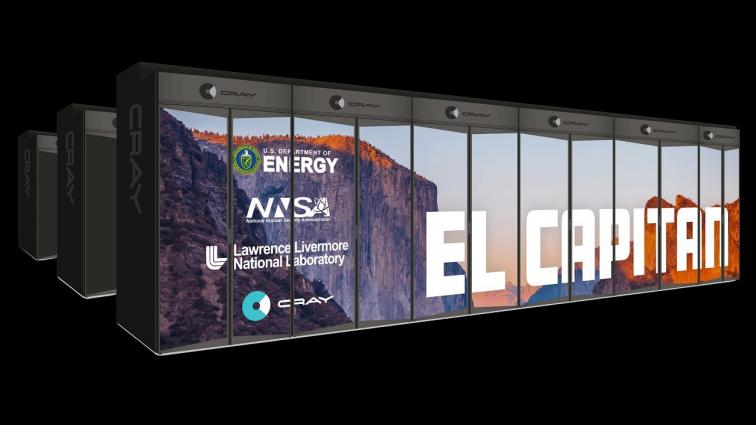 Developed as part of the second phase of the Collaboration of Oak Ridge, Argonne and Livermore (CORAL-2) procurement, El Capitan will serve the mission needs of NNSA. It will perform essential functions for the Stockpile Stewardship Program, which supports U.S. national security missions through leading-edge scientific, engineering and technical tools and expertise, ensuring the safety, security and effectiveness of the nation’s nuclear stockpile in the absence of underground testing. El Capitan will be used to make critical assessments necessary for addressing evolving threats to national security, and other purposes such as nonproliferation and nuclear counterterrorism.

"NNSA is modernizing the Nuclear Security Enterprise to face 21st-century threats," said Lisa E. Gordon-Hagerty, DOE under secretary for Nuclear Security and NNSA administrator. "El Capitan will allow us to be more responsive, innovative and forward-thinking when it comes to maintaining a nuclear deterrent that is second to none in a rapidly evolving threat environment."

Exascale performance will be delivered by a heterogeneous Central Processing Unit (CPU)/Graphical Processing Unit (GPU) architecture. This architecture will allow researchers to run exploratory 3D simulations at resolutions that are currently unobtainable and ensembles of 3D calculations at resolutions that are difficult, time-consuming or even impossible using today’s state-of-the art supercomputers. 3D simulations are becoming essential to meet the unprecedented demands of the NNSA Life Extension Programs (LEPs) and address nuclear weapon aging issues for which researchers have no nuclear test data.

"We are proud to partner with Cray in the coming years to usher in the era of exascale computing at LLNL, beginning the next chapter in the long, storied history we have at this Laboratory in leading-edge supercomputing," said Lab Director Bill Goldstein. "El Capitan will allow our scientists and engineers to get answers to critical questions about the nuclear stockpile faster and more accurately than ever before, improving our efficiency and productivity, and enhancing our ability to reach our mission and national security goals."

El Capitan will be built on Cray’s Shasta supercomputing architecture and will be comprised of Shasta compute nodes and a future generation of ClusterStor storage. This unique architecture will be connected with Cray’s new Slingshot high-speed interconnect. The Shasta hardware and software architecture can accommodate a variety of processors and accelerators, making it possible for Cray and LLNL to work together in the coming months to finalize the decision on which processor and GPU components will be used at the node level to maximize performance for the enormous projected workloads. The platform also will utilize Cray’s new system and analytics software stack, which will deliver the scalability and flexibility needed for exascale computing. It also will enable the converged use of modeling, simulation and AI in support of the Lab’s research missions.

"We are honored to be a part of this historic moment to deliver the next U.S. exascale supercomputing system to the DOE, NNSA and LLNL in support of their incredibly important mission," said Pete Ungaro, president and CEO of Cray.  "We couldn’t be more excited that Cray’s Shasta systems, software and Slingshot interconnect will be the foundation for the first three U.S. exascale systems. El Capitan will incorporate foundational new software technologies from Cray that are critical for the exascale era where digital transformation and the convergence of modeling simulation, analytics and AI are driving new, data-intensive workloads at extreme scale."

As part of the collaborative effort with the DOE Exascale Computing Initiative, LLNL scientists and principal investigators already are working on application development and software technologies that will be needed to ensure the necessary pieces are in place for El Capitan to have a fully functional exascale ecosystem from Day One. A center of excellence will be established shortly in collaboration with Cray to port and optimize existing codes to run on El Capitan with a goal of enabling programmatic work to initiate immediately after the machine is accepted into production.