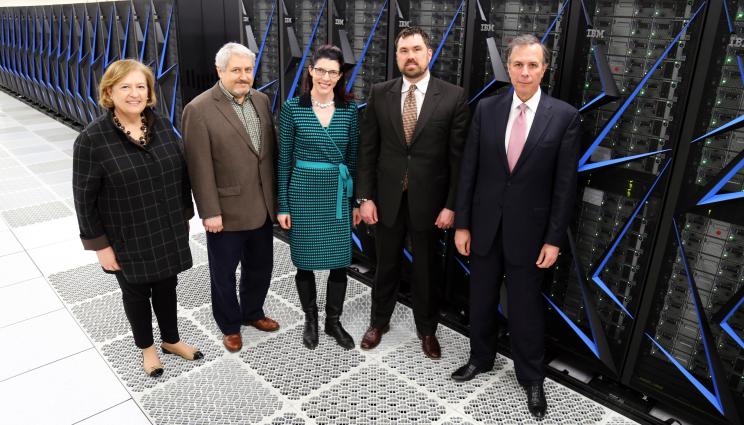 The meeting was part of a Bay Area visit by DOE and the VA to generate ideas for impactful projects and collaborations for 2018 and beyond. It included talks, workshops and discussions led by the National Nulcear Security Adminsitration's Chief Scientist Dimitri Kusnezov, the VA’s Chief Research and Development Officer Rachel Ramoni and numerous scientists and engineers from the DOE national labs.

"The goal of this meeting is to impact veterans," Kusnezov said. "We’re taking the next step in the next generation of tools -- such as embedding machine learning with AI into our computing systems -- creating things that don’t exist today and applying them to some of the biggest challenges the VA has faced. There’s a lot of potential to do things because it pushes the levels of use cases and the labs’ technologies."

The effort to plan concrete collaborative projects between the DOE and VA is aligned with the goals of DOE Secretary Rick Perry, who has made veterans’ issues a primary focus. The meetings at LLNL centered on ways advanced supercomputing technologies, including deep learning, neural networks, big data analytics and genome sequencing, have and could be applied to veterans' issues, such as post-traumatic stress disorder (PTSD), suicide and opiate addiction.

"Today, we brought together senior leaders from DOE and the VA with scientists and engineers from five DOE national laboratories to build a plan to use our leadership-class supercomputers to improve veterans' care," LLNL Director Bill Goldstein said. "These supercomputers have been a cornerstone of our stewardship of the nuclear stockpile for more than 20 years. Using them to solve other national challenges has always helped us develop and improve them. Applying this capability to veterans’ health is a unique path to the future of computing."

Combining the VA’s wealth of electronic health data -- collected on patients over a span of years -- with advanced genomic sequencing, metabolomics and pathology data analytics could provide new insight on neurological problems such as PTSD and traumatic brain injury (TBI), and help predict veterans’ risks of drug addiction or suicide. Working with DOE, Ramoni said, will create a "digital toolbox" for the future of health care data, and potentially save veterans' lives by enabling clinicians to intervene before warning signs become serious issues.

"We’re bringing together the best data and the most powerful computers to answer questions that are most important to our veterans," Ramoni said. "Analyzing all this data requires computing at a scale that hasn’t been brought to health care data before, and you can only do that at the national labs. We’re just scratching the surface of what we can do together to help veterans and advance science."

Representing veterans on behalf of DOE was Morgan Luttrell, a Navy Seal, Operation Enduring Freedom combat veteran and neuroscientist-in-training, whose twin brother Marcus authored the bestselling book "Lone Survivor," adapted to a blockbuster film in 2013. A senior adviser of veterans relations at DOE, Luttrell’s goal is to help veterans suffering from brain injury, PTSD and other neurological disorders by combining the VA’s massive amount of existing clinical data with the power of the DOE’s supercomputers.

"It’s about bringing together a collection of brilliance to combat the problematic issues facing our veteran community," Luttrell said. "No one else has the capabilities that the national labs have, so bringing that to bear is a win for everyone involved. We’re here to build partnerships; we want to take this data, turn it back around in minutes or seconds instead of years, and hand it back to our clinicians to increase the quality of life for veterans. Hopefully, now we’re looking for cures instead of treatments."

LLNL officials and researchers said they hoped the meetings would lead to further collaborative projects with the VA, such as using genomic and phenotype data to predict suicidal ideation and opioid abuse, as well as addressing cancer through machine learning and molecular data analytics.

"We’re starting to dream a little," said LLNL’s Director of Innovation Jason Paragas. "The emerging computer architectures are hinting that some of the key problems in how we care for our veterans could be facilitated. We’re hoping for a really exciting concept that the VA and DOE can do together that takes advantage of the resources of DOE to really change the game for veterans and advance DOE computing."