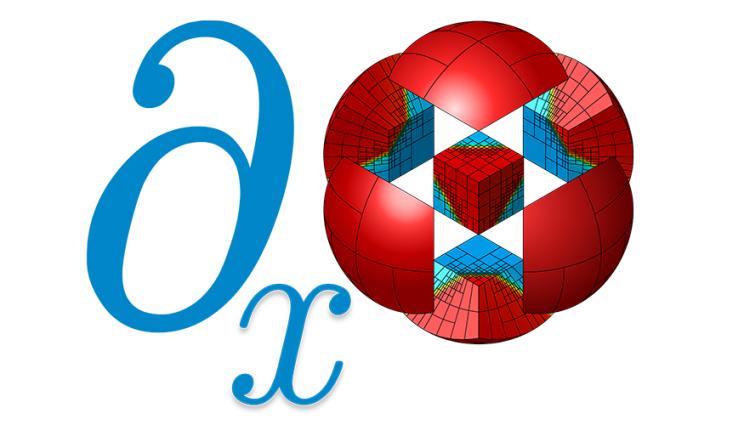 Under a recently funded project, researchers at Lawrence Livermore National Laboratory and the Massachusetts Institute of Technology (MIT) will address the challenge of efficiently differentiating large-scale applications for the Department of Energy by building on advances in LLNL’s MFEM finite element library and MIT’s Enzyme AD tool. Image courtesy of Tzanio Kolev.

A high performance computing (HPC) project led by Lawrence Livermore National Laboratory researchers was one of 22 recently awarded funding by the Department of Energy (DOE) under the 2022 “Exploratory Research for Extreme-Scale Science” (EXPRESS) program.

The team’s project will address the challenge of efficiently differentiating large-scale DOE applications — predicting how adjustments in design parameters will impact the output of a code. Knowledge of optimal outputs is increasingly needed for complex simulation codes to be used for design optimization, machine learning, uncertainty quantification and sensitivity analysis, among other applications. While automatic differentiation (AD) has made the differentiation process easier, traditional AD tools require significant changes that are not feasible for many existing large-scale DOE applications, Kolev said.

The team’s approach, which will focus on using finite element simulations and recent developments in AD, will be different from ‘black box’ approaches, Kolev said. The researchers plan to build on advances in the MFEM finite element library, developed at LLNL to provide a common discretization layer for HPC applications, and MIT’s Enzyme AD tool, which can perform AD alongside compiler optimization without the need for code changes.

“The goal of this project is to enable, for the first time, fast and easy-to-use computation of operator derivatives and gradients of functionals in general finite element DOE applications,” Kolev said. “Combining MFEM and Enzyme will allow us to develop algorithms that are faster, require less memory, and are more robust.”

DOE announced the EXPRESS awards on Sept. 19. The funding opportunity is sponsored by the Office of Advanced Scientific Computing Research within DOE’s Office of Science and is intended to explore high-impact, disruptive approaches to accelerate discoveries in scientific computing and extreme-scale science. The EXPRESS projects will address emerging technologies such as high-end computing, massive datasets, artificial intelligence and heterogeneous architectures including neuromorphic and quantum computing systems, according to DOE.

For a full list of projects, visit the web.

"Department of Energy Announces $15 Million in Exploratory Research for Extreme…