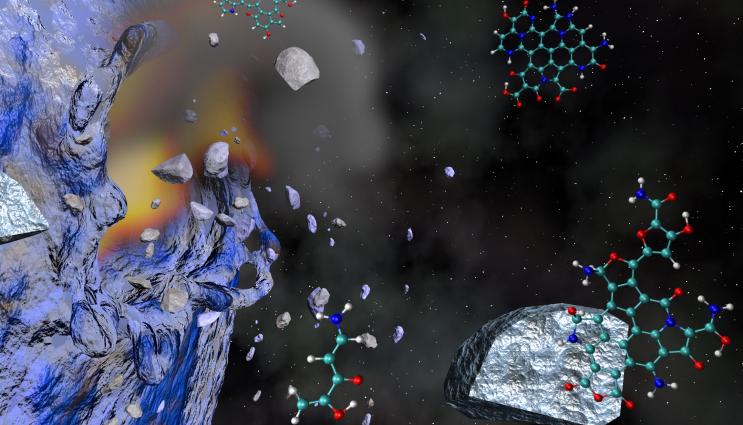 Comets screaming through the atmosphere of early Earth at tens of thousands of miles per hour likely contained measurable amounts of protein-forming amino acids. Upon impact, these amino acids self-assembled into significantly larger nitrogen-containing aromatic structures that are likely constituents of polymeric biomaterials.

That is the conclusion of a new study by Lawrence Livermore National Laboratory (LLNL) researchers who explored the idea that the extremely high pressures and temperatures induced by shock impact can cause small biomolecules to condense into larger life-building compounds. The research appears in the journal Chemical Science and will be highlighted on the back cover of an upcoming issue.

Glycine is the simplest protein-forming amino acid and has been detected in cometary dust samples and other astrophysical icy materials. However, the role that extraterrestrial glycine played in the origins of life is largely unknown, in part because little is known about its survivability and reactivity during impact with a planetary surface.

To address this question, the LLNL team used quantum simulations to model water-glycine mixtures at impact conditions reaching 480,000 atmospheres of pressure and more than 4,000 degrees Fahrenheit (approximating probable pressures and temperatures of a planetary impact). The intense heat and pressure caused the glycine molecules to condense into carbon-rich clusters that tended to exhibit a diamond-like, three-dimensional geometry.

Upon expanding and cooling to ambient conditions, these clusters chemically rearranged as they unfolded into a number of large, planar molecules. Many of these molecules were nitrogen-containing polycyclic aromatic hydrocarbons (NPAHs), which can be larger and more chemically complex than those formed in other prebiotic synthesis scenarios. A number of the predicted products had different functional groups and embedded bonded regions akin to chains of amino acids (also called oligo-peptides). Other small organic molecules with prebiotic relevance also were predicted to form, including known metabolic products, such as guanidine, urea and carbamic acid.

"NPAHs are important prebiotic precursors in the synthesis of nucleobases and could constitute significant aerosol intermediates in the atmosphere of Titan (the largest moon of Saturn)," said LLNL scientist Matthew Kroonblawd, lead author of the study. "The recovery products predicted by our study could have been a first step in creating biologically relevant materials with increased complexity, such as polypeptides and nucleic acids upon exposure to the harsh conditions likely present on ancient Earth and other rocky planets and moons."

"We used a high-throughput quantum molecular dynamics approach to ascertain the dominant chemical trends of simple life-building precursors like amino acids in impacting astrophysical icy mixtures," said LLNL scientist Nir Goldman, a co-author of the study. "Our work presents a novel synthetic route for large molecules like NPAHs and highlights the importance of both the thermodynamic path and local chemical self-assembly in forming prebiotic species during shock synthesis."

"Beyond the broader scientific impact of this research, our work also emphasizes the importance of generating statistically meaningful data when studying such complicated phenomena," said LLNL scientist Rebecca Lindsey, also a co-author of the study.

The work was funded by the NASA Astrobiology: Exobiology and Evolutionary Biology Program and LLNL’s Laboratory Directed Research and Development Program.