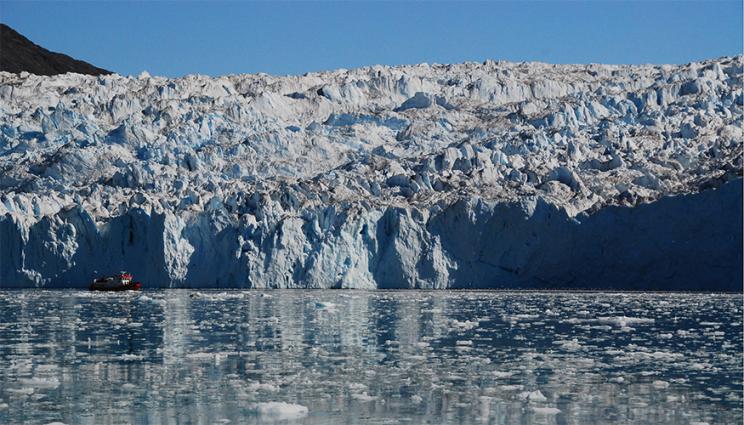 Melting glaciers like the Equp Sermia glacier in West Greenland, is contributing to sea level rise, one of the most noticeable effects of global warming. Image courtesy of Michele Koppes, University of British Columbia.

Consequences of today's carbon emissions will linger for thousands of years, study finds

The Earth may suffer irreversible damage that could last tens of thousands of years because of the rate humans are emitting carbon into the atmosphere.

"Much of the carbon we are putting in the air from burning fossil fuels will stay there for thousands of years — and some of it will be there for more than 100,000 years," said Peter Clark, an Oregon State University paleoclimatologist and lead author on the article. "People need to understand that the effects of climate change on the planet won’t go away, at least not for thousands of generations."

LLNL’s Benjamin Santer said the focus on climate change at the end of the 21st century needs to be shifted toward a much longer-term perspective.

"Our greenhouse gas emissions today produce climate-change commitments for many centuries to come," Santer said. "Today’s actions — or inaction — will have long-term climate consequences for generations of our descendants."

"The long-term view sends the chilling message what the real risks and consequences are of the fossil fuel era," said Thomas Stocker of the University of Bern in Switzerland, who is past co-chair of the Intergovernmental Panel on Climate Change’s (IPCC) Working Group I. "It will commit us to massive adaptation efforts so that for many, dislocation and migration becomes the only option."

Sea level rise is one of the most noticeable impacts of global warming, yet its effects are just starting to be seen, according to the article. The latest IPCC report calls for sea level rise of one meter by the year 2100. In the new study, however, the authors look at four different sea level-rise scenarios based on different rates of warming, from a low rate that could only be reached with massive efforts to eliminate fossil fuel use over the next few decades, to a higher rate based on the consumption of half the remaining fossil fuels over the next few centuries.

With just two degrees (Celsius) warming in the low-end scenario, sea levels are predicted to eventually rise by about 25 meters. With seven degrees warming at the high-end scenario, the rise is estimated at 50 meters, although over a period of several centuries to millennia.

"It takes sea level rise a very long time to react — on the order of centuries," Clark said. "It’s like heating a pot of water on the stove; it doesn’t boil for quite a while after the heat is turned on — but then it will continue to boil as long as the heat persists. Once carbon is in the atmosphere, it will stay there for tens or hundreds of thousands of years, and the warming, as well as the higher seas, will remain."

The new paper makes the fundamental point that considering the long time scales of the carbon cycle and of climate change means that reducing emissions slightly or even significantly is not sufficient. "To spare future generations from the worst impacts of climate change, the target must be zero — or even negative carbon emissions — as soon as possible," Clark said.