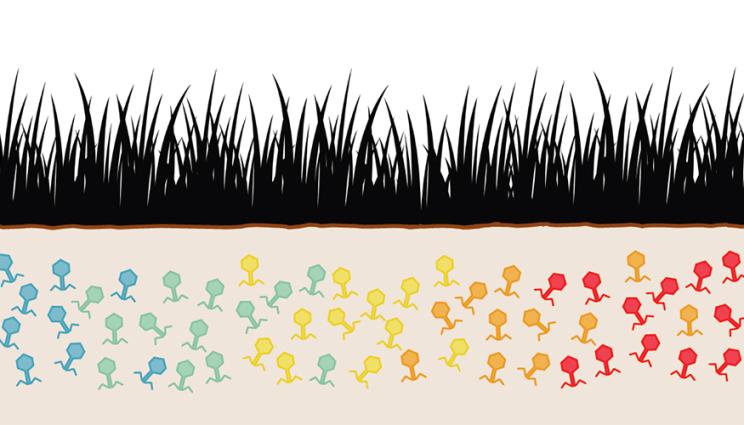 In grassland soils, the types of viruses are dramatically different over short distances in space and time. The makeup of viral communities also was very sensitive to changes in soil moisture caused by an experimental drought. These effects may have downstream implications for the amount and pathways of soil-carbon cycling. Image by Christian Santos Medellín/UC Davis.

Come rain or shine, viruses live on in soil

Soils contain diverse communities of microorganisms, including bacteria, fungi, protists and viruses. Interactions between these tiny organisms shape the ability of soils to store carbon underground.

However, not much is known about the spatial patterns and dynamics of viral communities in soil.

New research by Lawrence Livermore National Laboratory (LLNL) scientists and collaborators show that grassland viral communities are highly spatially stratified across just a single field, suggesting strong dispersal limitations at the local scale. The research appears in the Proceedings of the National Academy of Sciences.

“Knowing the composition and turnover of viral communities across space and time is necessary to begin unraveling what constrains host-virus interactions in soil,” said LLNL scientist and co-author Jennifer Pett-Ridge. “We found that the soil ‘virosphere’ is highly diverse, dynamic, active and spatially structured; it also appears to be capable of rapid responses to changing environmental conditions, particularly the amount of rainfall.”

Soils are physically, chemically and biologically heterogeneous. The intricate network of aggregates and pore spaces that constitute the soil matrix not only sustains a varying landscape of properties but also restricts the movement of microorganisms.

Through infection and mortality of other microbiota, viruses have countless effects on host metabolism, evolution and Earth’s biogeochemical cycles. The sheer abundance of soil viruses hints at their likely importance in terrestrial ecosystems.

Previous rainfall manipulation experiments have shown that reduced precipitation can reshape soil bacterial community composition. Until recently, it was not known whether these shifts might be coupled to changes in the soil virosphere, although recent observations suggest that water availability could be a major driver of soil viral community assembly.

In the new research, the team found that viruses adapt more rapidly than their microbial hosts when exposed to climate changes such as drought. As soil moisture decreased, the viral community composition shifted and types of viruses that are predicted to infect drought-adapted actinobacteria became more dominant.

The team studied soil viruses in multiple square-meter annual grassland plots in Hopland, California. For three years prior to the study, these plots were maintained with either 50% or a full complement of the normal annual rainfall.

“Characterizing the compositional response of soil viral communities to reduced precipitation can help us understand the potential impact of a changing environment on host-virus interactions and potential downstream effects on the soil-carbon cycle,” Pett-Ridge said.

Other institutions involved in the project include UC Davis and UC Berkeley. The research was funded by the Department of Energy’s Office of Science, Office of Biological and Environmental Research, Genomic Science Program.