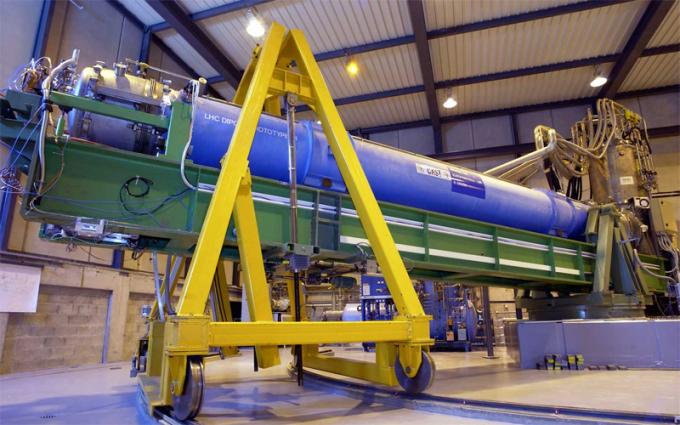 Lawrence Livermore National Laboratory (LLNL) researchers, along with international collaborators, are on a mission to find particles contributing to dark matter, which is expected to make up most of the matter in the universe.

In a paper published May 2 in Nature Physics, the CERN Axion Solar Telescope (CAST) at CERN presented new results on the properties of axions -- hypothetical particles with minimal interactions with ordinary matter that therefore could constitute some or all of the mysterious dark matter, which is five times more abundant than normal matter.

Axions were postulated by theorists decades ago, initially to solve an important issue in the Standard Model of particle physics related to the differences between the amount of matter and antimatter. The particle was named after a brand of washing detergent, since its existence would allow the theory to be "cleaned up."

LLNL has been an active collaborator in CAST since 2005, primarily funded through support from the Laboratory Directed Research and Development program. The Lab plays a strong role in this large international collaboration and has a major leadership role in the proposed successor project, the International Axion Observatory, IAXO.

"This is ground-breaking science with implication for elucidating the nature of dark matter, solving a long-standing particle physics problem (hinting at physics beyond the Standard Model) and constraining cosmological models," said Mike Pivovaroff, a member of the LLNL CAST team and one of the four CAST collaborators that wrote the manuscript.

"This was a true team effort, highlighting our interdisciplinary expertise in X-ray optics and delivering space-like instrumentation. LLNL led the team, including researchers from Columbia University (New York, New York) and DTU-Space (Copenhagen, Denmark), that designed, built, installed and calibrated the X-ray telescope that was one of the key technologies that enabled this result."

A variety of Earth- and space-based observatories are searching for axions, which if they exist, would have been produced during the Big Bang and also would be continuously produced in the interior of our sun.

The CAST experiment searches for axions using a helioscope, a special instrument that tracks the sun as it moves across the sky. At its heart is a 10-meter-long superconducting magnet originally built for the Large Hadron Collider. The 50-ton magnet acts almost like a kaleidoscope: any solar axions entering the tube would be converted by its strong magnetic field into X-ray photons. The X-ray telescope developed by the LLNL researchers focuses the photons into a small spot, greatly enhancing the sensitivity of CAST.

The CAST helioscope has operated since 2003 and follows the movement of the sun for 90 minutes at dawn and dusk, over several months each year. The experiment is aligned with the sun with a precision of about one hundredth of a degree.

"These results position LLNL for a major leadership role in IAXO, both on the science side and instrumentation build," said LLNL’s Julia Vogel, who is the U.S. spokesperson for the IAXO project. "Taken with other Lab activities, including ADMX (axions), LUX/LZ (WIMPs) and searches for primordial black holes, this new work gives LLNL a very strong portfolio of dark matter research."