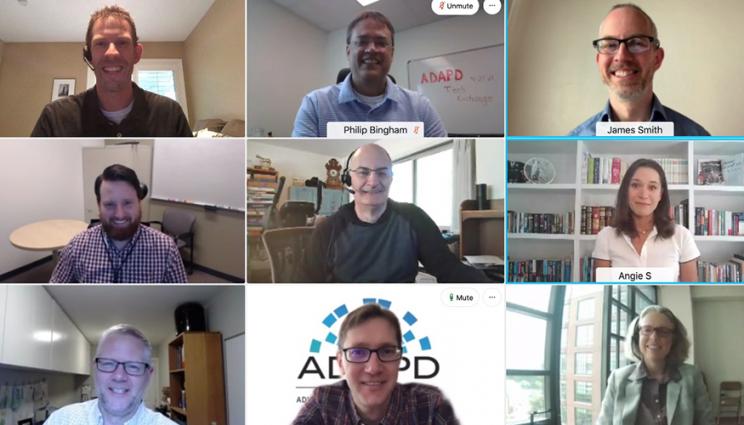 Members of the Advanced Data Analytics for Proliferation Detection program took part in a two-day technical exchange where researchers discussed how their work connects to the mission of the program.

The goal of the meeting was to highlight the science-based and data-driven analysis work conducted by ADAPD to advance the state-of-the-art to accelerate artificial intelligence (AI) innovation and develop AI-enabled systems to enhance the United States’ capability to detect nuclear proliferation activities around the globe. ADAPD is creating new capabilities for predictive modeling and multi-phenomenology detection to enable detection of emerging nuclear proliferation threats and early efforts to develop nuclear weapons far earlier than has even been possible.

The program is funded by the National Nuclear Security Administration’s (NNSA) Office of Defense Nuclear Nonproliferation R&D. The program directly addresses the office’s mission by creating capabilities (both methods and labs-resident expertise) to enable earlier detection of low-profile nuclear proliferation.

Jamie Van Randwyk, LLNL deputy venture manager and mission lead, said the overall focus of the program has shifted in a big way during FY21 toward “mission transfer."

"There is still plenty of R&D going on, and the application of developed methods, algorithms and tools to real-world problems is now becoming a primary feature of the project,” he said. “This technical exchange featured talks by researchers with a special emphasis on how their work connects to the mission.”

The event is one of two annual meetings designed to facilitate information sharing between researchers and generate discussion about science, technology and applications of project-funded research. This meeting would have taken place in person at one of the venture partner laboratories but COVID-19 impacts have prevented that for the last 12-plus months.

The meeting also is an opportunity to update Angela Sheffield, senior program manager for the Office of Proliferation Detection in Defense Nuclear Nonproliferation R&D at NNSA, on venture progress and new developments.

“ADAPD is working hard and fast to address two of the most pressing issues in national security,” Sheffield said. “This includes the threat of nuclear weapons and the race among global powers to develop and deploy artificial intelligence.”

Sheffield said to transform national security with AI, the United States needs the next-generation of artificial intelligence – innovative methods and technologies that enhance sense-making and decision- making in high-consequence and specialized missions.

“Through the technical exchange, ADAPD accelerates progress against its research agenda to deliver cutting-edge decision intelligence methods to the national security enterprise and AI technology sector faster,” she said.

Sheffield said the work is highly important and not being conducted elsewhere. DOE’s specialized R&D in AI and its applications to national security are world-class. ADAPD is central to transform national security with AI and win in competition and conflict with Russia, China and emerging threats.

Van Randwyk said ADAPD is moving into a phase where the program is transitioning technology to mission partners. This involves deep understanding of their needs and incorporating their feedback into our R&D. ADAPD is a five-year program and as it moves into years four and five (FY22 and FY23), the program is focused on ensuring that the work isn’t simply “thrown over the wall” to stakeholders.

“We want to ensure that the work is transitioned in such a way that it has daily meaningful impact on the nonproliferation mission,” he said. “We anticipate transitioning software, algorithms, process and methodologies, all as appropriate to the individual mission owners.”