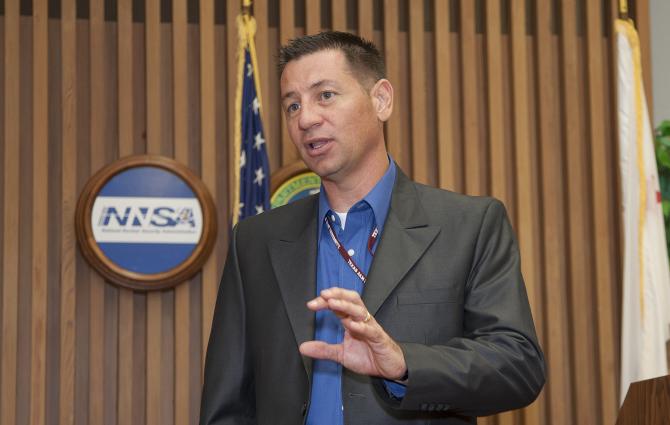 "The only safe place is where you are standing."

This is how Brian Cracchiola described the conditions faced by U.S. soldiers in Afghanistan during his talk Wednesday entitled, "Unraveling the Gordian Knot: The Counterinsurgency Training Center-Afghanistan (CTC-A)."

Cracchiola, a 15-year Lab employee and currently associate operations manager for PND/B-Division also serves as a captain in the Army Reserves. About two months ago, he returned from a tour of duty in support of the NATO Training Mission-Afghanistan where he served as an instructor and advisor at the CTC-A in Kabul.

Briefly covering the history and background of counterinsurgency, Cracchiola gave an interesting 'behind the scenes' look at his role alongside Afghan soldiers and police officers who will take over the country's security by 2014. In addition to the U.S., nations from around the world are pitching in to help, including the United Kingdom, Australia, Canada, Italy, Japan and El Salvador.

The prerequisites of counterinsurgency include a vulnerable population and the lack of government control. The core objectives of the U.S. in Afghanistan are defeating the insurgents and securing the population. Often times winning the hearts and minds of the people is the greatest challenge. The term "hearts and minds" (hearts meaning emotion; minds meaning logic) in the military sense, goes back as far as President John Adams and refers to an approach in counterinsurgency. However, the question Afghans often ask is: "How will you win our hearts and minds if you are killing our people?"

"The (U.S.) military relates to tactics founded in the 1950s," Cracchiola commented. "We don't do a good job in civil liberty. We have to understand the culture of the country better. We need to consider the sensitivity of the people."

Cracchiola told the audience that during his tour, he worked alongside as many as 15 to 20 different nationalities.

"Americans tend to think that if we throw dollars at a problem it will be solved."

The problem during the transition in Afghanistan is complex and asymmetric, he added. "We as soldiers are driven by the metrics of our success. But, how do you quantify relationships?" There are many paradoxes about the Afghanistan efforts because the culture there is vastly different from ours and many beliefs are largely driven by religion. "We think completely differently than the Afghans."

For instance, some Afghans may describe U.S. soldiers donned in protective gear and helmets, and riding in tanks along the countryside as "aliens who descend from an armored box."

And there also are other inconsistencies. The more you protect your force, the less secure you may be. And the more force you use the less effective it is. Often a soldier finds that concealing his weapon is a better approach when dealing with the country's people and gaining trust.

Building relationships with the people is important. To explain, Cracchiola cited a personal example. During his tour, he received a very large container of Hershey's syrup in a care package from home. He didn't know what to do with it so he gave it to an Afghan barber he had befriended. The barber gave it to his children who very excited and appreciative.

"The more you build a relationship the more intelligence you are bound to get," he said.

During a question and answer period that followed the talk, an audience member asked: "What can we as American citizens do to help?"

The talk, in recognition of Veterans Day, was sponsored by the Lawrence Livermore Laboratory Armed Forces Veterans Association and the Lab's Office of Strategic Diversity Programs.