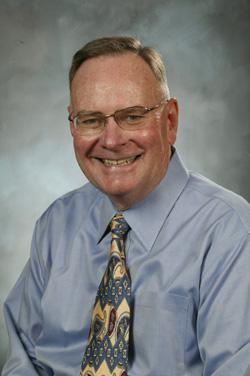 For the second straight quarter, a Laboratory employee has received an award from the Defense Threat Reduction Agency (DTRA) for his work in post-detonation nuclear forensics.

The most recent winner is Lab physicist Roger White, a designer in B-Division from the Weapons and Complex Integration (WCI) Directorate and a principal investigator for nuclear forensics design.

White was named the "top contributor of the quarter" for the second quarter of fiscal year 2012 (January-March, 2012) for integrating a multi-lab effort to develop a prompt diagnostics research event scheduled for early this spring.

Funded by DTRA, the program is developing new methods for improved forensic analysis of speed-of-light signals from a nuclear explosion. These signals are transient phenomena that can be used by forensics designers to help reconstruct, for example, information about a terrorist-detonated nuclear device.

Working with these prompt signals and other information gained from radiochemical analysis of the nuclear debris, the program goals are to reduce the timeline and improve the capability of technical nuclear forensics to help in attribution if such an event were to occur.

"This is a perfect example of multi-disciplinary teams from Global Security, Weapons and Complex Integration, and Physical and Life Sciences directorates working together to solve a critical 21st century nuclear security problem," White said.

The previous LLNL "top contributor of the quarter" recipient was Lab geophysicist Arthur Rodgers, who received his DTRA award for the first quarter of fiscal year 2012 (October-December 2011). Rodgers and his fellow team members are developing a software package that will be used to interpret speed of sound data for explosion forensics.