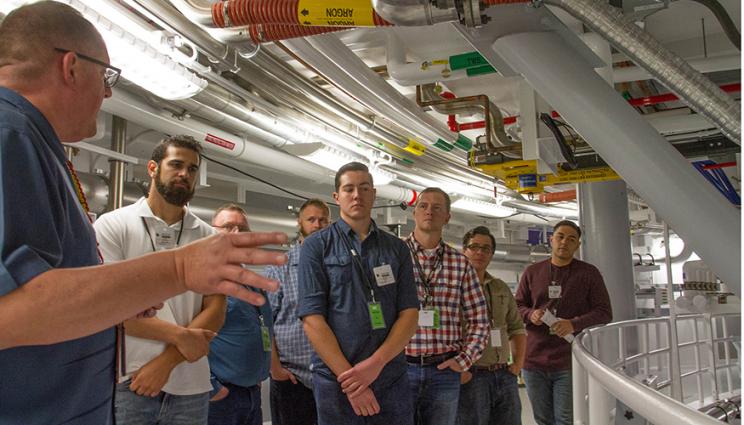 Veteran interns get taste of 'dream' jobs at LLNL

Growing up in Livermore, Frankie Stoneham never pictured herself as an engineer. She didn’t particularly like math and, like many military veterans, wasn’t sure what she wanted to do once her service ended.

But over this past summer, Stoneham, a first-year student at Las Positas College and former Army specialist deployed to Iraq, heard about the school’s Engineering Technology Program. The two-year cohort-based program provides veterans with the opportunity to earn a summer internship at the Lab and perhaps, a foot in the door to an engineering career.

"When my dad first told me about it, I was like engineering? Really?" Stoneham said. "But now I actually enjoy math. I want to know everything there is to know."

Just before the fall semester began, Stoneham, 29, quit her job at a local tile company to give her full attention to the program. Now she has the chance to follow in the footsteps of family members and friends who have worked within the Lab’s confines.

"I’ve always dreamed of being behind those gates," Stoneham said. "It’s like this whole other world. I think it’s cool that people are coming back from combat and (the Lab) is finding ways to help them."

The Lab, along with the Alameda County Workforce Investment Board (WIB), the nonprofit Growth Sector and Las Positas College, established the program in 2014 to give returned veterans training and education for future careers in engineering and build a workforce for the three Bay Area national laboratories, as well as NASA.

Engineering Recruitment and Diversity Manager Beth McCormick, who helped create the program, said it has made a huge impact on encouraging veterans to consider furthering their education and pursue bachelor’s degrees in engineering.

"The two-year program includes an internship where the vets are able to apply their newly learned math and engineering skills," McCormick said. "This hands-on experience, working alongside accomplished engineers and technicians, has proven to motivate students to stay in school: Some retake classes to up their grades, and many are resetting their goals for higher education. The impact of applied learning is really amazing. If we were able to give more community college students this experience, we would increase the persistence rate in STEM education."

Army veteran John Ruiz, 32, of Tracy, left a lucrative job in the railroad industry to go full bore into engineering. Joining the program was a leap of faith for Ruiz, but once he realized the potential rewards, he had to go for it.

"I could’ve stayed with the railroad, but the work at the Lab seemed so much more interesting that I was willing to leave that all behind," Ruiz said. "I have a mortgage, car payments and a daughter, but just the possibility was enough to make me willing to gamble everything. I had something I wasn’t excited about and (my wife) supported me. My old job was secure, but it would’ve nagged at me if I didn’t do it."

An infantry squad leader in Iraq, Ruiz worked in construction after leaving the Army in 2006, and later was exposed to materials engineering though a local company. After working for the railroad, Ruiz returned to school, where a cohort told him about the engineering program. He jumped at the chance to pursue a more fulfilling career.

"I never dreamed I’d have the opportunity to work at the Lab someday," Ruiz said. "I thought you had to be somewhere high up in academia to get there. I didn’t do well in school, but once I saw what (engineers) did, I thought it was so interesting and I wanted to be a part of it."

During the 24-month program, the cohorts take classes in higher math, engineering and manufacturing. They’re required to maintain a 3.0 programmatic GPA and go through an interview process to earn a summer Lab internship. The first group of 16 cohorts is scheduled to graduate in May 2016.

Ryan Kelley, who served as a corporal and ordnance technician in the Marine Corps, was among those initial participants. He earned a 10-week internship at the Lab last summer, and was brought back to work part time at the High Explosives Applications Facility (HEAF) as an engineering technologist, where he assists physicists in studying the explosive properties and shock physics of research materials.

Kelley, 25, recently marked a year and a half working for the Lab, while continuing to go to school full time to complete the program.

"It got me into a place I wanted to be. It got me into the engineering field and two years of work-related experience, so once I’m done it will be hard for me to not find a place of employment," Kelley said. "It’s changed everything. Getting out (of the military) and going to school is a whole different lifestyle. It takes some getting used to. When you’re with 20 other veterans in the same classes, you have that bond."

HEAF Facility Manager Brian Cracchiola, an Army veteran himself, said he’s made it one of his priorities to recruit returned veterans because of the exclusive nature of the job.

"This is a tremendous opportunity for both the Lab and these veterans," Cracchiola said. "A lot of them are coming back from multiple deployments; they’re at the end of their military careers. A lot of companies don’t understand the technical aspects of some of these warfighters’ skills, but here at the Lab, they fit right in."

Cracchiola, who served in Afghanistan and remains on active duty for the Army Reserve, said the value in recruiting veterans lies not only with their technical skills, which provide a strong foundation for further specialized training, but also through intangibles such as leadership, work ethic and a clear understanding of the Lab’s core ideals.

"They absolutely bring skillsets you’re not going to find outside the veteran talent pool," Cracchiola said. "They understand the importance of the Lab’s mission. A lot of us veterans want to continue serving our country, and we still are, just not in uniform."

Richard Bell, a 29-year-old Marine sergeant who joined the armed forces following the Sept. 11 attacks, started getting the bug for 3-D printing while in Afghanistan in 2010. Once he left the service, he picked up his first 3-D printer and has been tinkering with the devices ever since, redesigning products and modifying the printers to his own specifications.

"I’ve been obsessed with 3-D printing ever since I found out I could have one," Bell said. "I truly and firmly believe that science and engineering, and the development of a better future, is key for everyone. It’s not about waiting for a better world, it’s about building a better world."

The newest cohorts are working hard toward securing internships for this upcoming summer. Bell, who recently taught 3-D printing to students on behalf of Laney College, has his sights set on becoming a technician in the Lab’s Additive Manufacturing program. Ruiz said he hopes his experience lands him a job in materials engineering, in line with his interests in welding, fabrication and machine work.

"When I tell my friends about (the program) I sort of feel pretentious, but I’m proud I’m able to be involved in something like this," Ruiz said. "This is a big opportunity."

Stoneham, who has a 7-year-old daughter, said she’s looking to go into prosthetics to help people.

"Every time I go to school, I’m super excited. I’ve never been like that before," she said. "I feel like we’re on the spearhead of something that’s in its infancy. It’s like the Lab is my home, and I’m not even there yet."