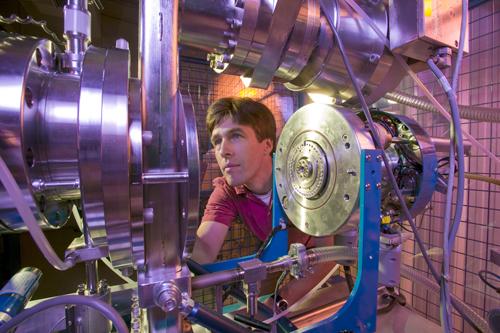 Using CAMS to chase the cure for disease

By using a minute amount of a new drug that has no beneficial or adverse effect on the patient, new medications could get to the market sooner.

Using a technique dubbed "microdosing," researchers in the Center for Accelerator Mass Spectrometry (CAMS) have been applying accelerator mass spectrometry to biological research for more than 20 years.

Microdosing involves labeling a small quantity of a new or established drug with carbon-14.  A tiny quantity is then given to a patient to determine if the drug finds its way to the site where infection or disease occurs. Tests taken a few hours later would measure the amount of the drug in the body and its location.

From there, a pharmaceutical company could determine if the new drug could be given to humans in larger amounts (at potential therapeutic levels to treat disease).

"This is a small, safe amount to treat patients at the sub-therapeutic level," said LLNL biochemist Ken Turteltaub, a co-developer of AMS for biological research. "Microdosing could reduce the amount of preclinical work, time and cost of getting new drugs to market."

CAMS hosted a workshop Thursday (Nov. 19) on "Accelerator Mass Spectrometry in Pharmaceutical Research" in which pharmaceutical company executives discussed their experiences with AMS and their view on the value and potential of AMS for the pharmaceutical industry.

The workshop was held so that LLNL scientists can better understand what industry needs to translate the technology to broad use by the pharmaceutical community and to move the technology out to the public and private sector, CAMS Director Graham Bench said. "It's a new way to potentially speed up drug discovery."

Preclinical testing is one of the early steps of getting a potential new drug candidate filed as an investigational new drug (IND). In typical testing of pharmaceuticals, the preclinical research is conducted using animal models, but "animals are often not predictive of what happens in people," Turteltaub said. Only about 10 percent of new potential clinical entities make it to the IND phase, he said.

"If you can shorten the time it takes to get a new drug candidate into humans, you can determine which compounds are the right compounds that can make a difference in attacking the actual disease," Turteltaub said.

To make it easier for industry to analyze samples, CAMS is developing an online liquid chromatography interface technology that would allow for sampling analysis without first converting the sample to graphite (which is typically done at CAMS before a sample can be run through the accelerator and analyzed).

The Lab has done AMS biological research with a number of companies, including Merck, Proctor & Gamble and Trius Therapeutics.

At the workshop, Tomas Baillie, a former vice president at Merck and now a professor at the School of Pharmacy at the University of Washington, said using AMS in pharmaceutical studies saves time and money.

"It is especially useful in cases where it's been very difficult to detect what happens in humans with a particular drug," he said. "This workshop is a unique opportunity to have a role in the further development of this capability."

Laboratory researchers are working with oncologists to test this method on cancer patients and volunteer subjects. The amounts of the drugs and carbon-14 being measured are so small that no other instrument other than the accelerator mass spectrometer can detect and measure the minute quantities.

Highly sensitive accelerator mass spectrometry (AMS) was originally used for carbon-14 dating in research areas such as archaeology, paleoclimatology and paleobotany, but LLNL has been applying AMS to biological research for almost 20 years.

The earliest biological experiment at CAMs examined the effects of low doses of suspected carcinogens on rodent DNA to understand how to extrapolate cancer risk from the high doses used historically in cancer testing to the doses humans actually encounter. This work led to LLNL becoming a National Institutes of Health-funded center to develop AMS for biomedical uses and now supports more than 60 biomedical collaborators worldwide and continues to develop AMS.

Today, AMS studies of new drugs, nutrients and toxic compounds can use human subjects because the safety of the AMS approach has been demonstrated repeatedly. The amount of radioactive carbon-14 used to tag a biomolecule is less than the naturally occurring cosmic radiation an airline traveler encounters during a routine flight.

The LLNL team hopes to use the information gathered at the workshop to further the use of AMS by pharmaceutical companies in getting needed new therapies to the patient faster, cheaper and safer than now possible.