LIVERMORE, Calif. — Lawrence Livermore National Laboratory scientists, Claire Max and Ellen Raber, are two of nine awardees to be inducted into the Alameda County Women’s Hall of Fame.
The Alameda County Board of Supervisors, the Alameda County Health Care Foundation and the Commission on the Status of Women recognized Max, a Berkeley resident, and Raber, a Livermore resident, for their contributions in the fields of science and environment, respectively. They will be honored March 8 during the 10th Annual Women’s Hall of Fame Awards ceremony.

Max, an astrophysicist with LLNL’s Institute of Geophysics and Planetary Physics and associate director of National Science Foundation’s Center for Adaptive Optics based at UC Santa Cruz, specializes in the use of adaptive optics to minimize the blurring effects of turbulence in the Earth’s atmosphere so that astronomers can view celestial objects through ground-based telescopes as clearly as if the telescopes were space-based.

The system uses light from a relatively bright star to measure the atmospheric distortions and to correct for them, producing images with unprecedented detail and resolution.

In the early 1980s, at about the same time as French researchers, Max proposed using a sodium laser guide star attached to large astronomical telescopes to better view virtually any star in the galaxy. The laser guide star system is used at UC’s Lick Observatory and the W.M. Keck Observatory in Hawaii.
Max also was the founding director of Livermore’s IGPP and in 2002 was named a fellow of the American Academy of Arts and Sciences for her astrophysics research. She is a 29-year Laboratory employee.

"It’s a great honor to be selected for this distinction," Max said. "I’m happy to serve as a role model and contribute to the betterment of the county that I live in."

In her role as head of the Laboratory’s Environmental Protection Agency, Raber has led the effort to accelerate the opening of LLNL’s state-of-the-art Decontamination and Waste Treatment Facility that replaces an older World War II-era facility.

Raber has been a strong proponent of making sure that LLNL operates the best environmental facilities to ensure protection of its workers and the community.

Raber’s most recent accomplishment has been to lead the development of a decontaminating gel (known as L-gel) that is effective against chemical and biological warfare agents but then breaks down to environmentally acceptable byproducts. The patented gel is available for use in civilian facilities in response to a terrorist incident or in the case of an accidental release of a biological or chemical agent.

In her 22 years at Livermore, Raber has used her background in geochemistry to resolve a variety of environmental issues related to geothermal, underground coal gasification, the strategic petroleum reserve and nuclear waste management. She has also worked on technology to provide award-winning solutions for chemical weapons treaty verification and intelligence community applications.

"The Laboratory takes its environmental responsibilities to the community and the nation very seriously," Raber said. "It is a privilege that both Claire and I will serve as the Laboratory’s inductees into the Hall of Fame."

Laboratory news releases and photos are also available electronically on the World Wide Web of the Internet at URL http://www.llnl.gov/PAO and on UC Newswire. 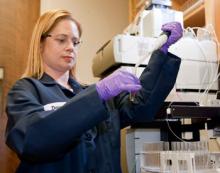 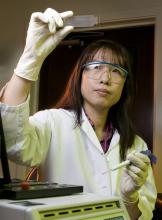