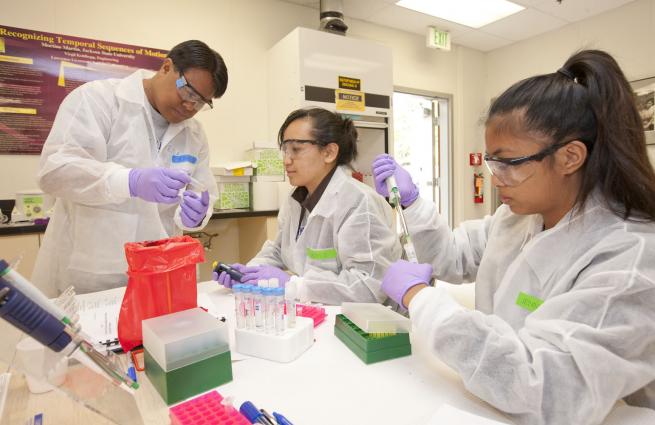 Teacher Michael Sana instructs his students Kahealani Uehara (left) and Jennica Ramones as they conduct their laboratory experience on gene-sequencing at ETEC this summer. Photo by Jacqueline McBride/LLNL

Michael Sana hopes that his students will be as passionate about science as he is.

As a biological science teacher and department head at Waipahu High School on the island of Oahu, Hawaii, Sana looks for ways to build partnerships that could help bring more Hawaiian students into the science pipeline.

Take his affiliation with the Lab. Sana was first introduced to LLNL's Science Education Program and the Teacher Research Academy in 2007. While at a professional development conference, he met Kirk Brown, a former science teacher at Tracy High and currently director of the San Joaquin County Office of Education's Science and Special Projects. Brown, a long time advocate and participant of the Lab's teacher education programs, encouraged Sana to apply to one of the academies.

Since then, Sana has spent many weeks each summer at the Lab's Edward Teller Education Center (ETEC) and with Lab scientists studying biotechnology research. In fact, he and two of his students earlier this summer completed a two-week session in collaboration with the LLNL Student Scholars Program and the Waksman Institute at Rutgers University.

Waipahu High School is one of the largest in Hawaii, and is considered a Title I school, where 49 percent of students receive free or reduced lunches -- an environment that he is all too familiar with. He grew up in a family of eight children in a low-income area of Kalihi Valley, but is the first in his family to graduate from college, from the University of Hawaii.

"I made a promise to my mother who died of cancer right before I started college, that I would complete my education and be successful," Sana said with emotion. "She has been my motivation and my inspiration to do well.

"What has really helped me in the classroom has been my Lawrence Livermore Lab experience," he said. "I had never had the opportunity to work in a laboratory before. In college you learn concepts. I always wondered exactly what they (scientists) do when they are in their labs." Through the Lab's teacher programs, he has been able to find out.

In 2008, he worked at the Lab with mentor scientist Brent Segelke. "Being mentored by a scientist and working on real cutting edge projects gives you a look at what scientists do. It changed how I teach. Now, I bring those same skills I practiced in the lab to my students."

Critical thinking is the rule rather than the exception as well as problem solving, he adds. Even something as incidental as encouraging students to use notebooks to record their research findings sheds more light on how scientists do their jobs.

Many of Sana's students who have since graduated and moved on often come back to visit him.

"One recently worked at San Francisco University in research and another student did an internship at University of Illinois at Chicago, where he wrote a 68-page research paper that is being published," Sana said proudly.

Previous students' success stories affirm what Sana is trying to accomplish. "It shows that what I am doing is helping and meeting the needs of the pipeline. It demonstrates that others have succeeded and they can too, and that there are good paying jobs in the science fields."

"Lawrence Livermore offers a chance for teachers to talk with researchers and find out the answers to their questions like, 'What do I need to do to support the pipeline? What do my students need from me?'

"My role now is to develop partnerships. How do I continue to increase the network that we must be involved with in order to compete in a global society."

At Waipahu, Sana helped initiate the start of an academy of engineering, "a way for our students to start thinking of their careers ahead of time, and better prepare them for college."

Last year, he recruited two of his fellow teachers to participate in the Lab's Teacher Research Academy. And, in 2010, he brought three of his students to the Intel International Science and Engineering Fair held in San Jose, as well as the Hawaiian science fair delegation to visit Lab. His work with students is paying off. He helped initiate a summer science enrichment program that became so popular additional sessions had to be added to accommodate the interest. More importantly, his school's assessment of STEM (science, technology, engineering and math) at the state level also has risen.

"Every student has the potential and ability, if you can turn on the spark," Sana says about his philosophy.

"And, if students are having fun doing an activity, then they will be better learners."