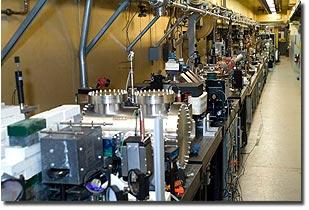 The T-TREX system including the accelerator. The grey box in the foreground is the camera that measures the beam. 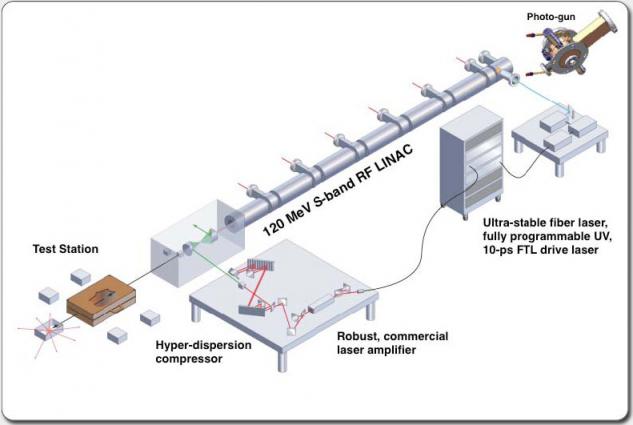 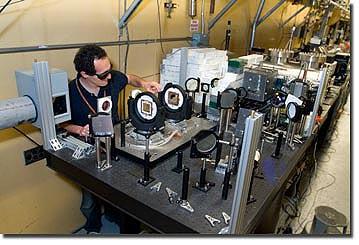 The output end of T-REX and the interaction laser that is used to create the 776 keV photons. The scientist is Miro Shverdin, seen as he is adjusting the frequency conversion crystals that produce the blue laser photons that collide with the energetic electron beam.

When it comes to laser-based light sources, there are few brighter than T-REX, an LLNL project developed jointly by the NIF & Photon Science Principle Directorate and the Physical Sciences Directorate.

The system will be able to study isotopes, allowing researchers to address challenges in homeland and international security, nonproliferation, advanced nuclear power systems and nuclear waste identification. For example, in the Department of Homeland Security's FINDER project for high-confidence detection of nuclear materials to enhance port security. Addressing these national security missions also may also lead to new possibilities for medical and industrial applications of isotope-specific imaging.

T-REX achieved megaelectronvolts (MeV) class first light late last month. On March 26, its 10 picosecond electron beam had been powered up to 120 MeV and collided with UV laser photons, and was used to produce gamma-ray energy of .776 MeV, making it the brightest such instrument in the world in this energy range.

"We are still working on verifying the absolute record brightness of the source," said Chris Barty, program director for the Lab's Photon Science and Applications Program.

"But without a doubt, the ~0.75 MeV radiation produced by T-REX is unique in the world with respect to its brightness, spectral purity, tunability, pulse duration and laser-like beam character," he said.

The system builds on a past Livermore project called Picosecond Laser-Electron Interaction for the Dynamic Evaluation of Structures (PLEIADES), which was funded by the Laboratory Directed Research and Development (LDRD) Program, and the Domestic Nuclear Detection Office (DNDO) of the U.S. Department of Homeland Security.

In 2003, the PLEIADES system generated record pulses of 70-kiloelectronvolts (keV) X-rays. Traditionally, beams in this particular energy regime are created in synchrotron facilities.

According to Barty, "With its MeV-range capabilities, T-REX's peak brightness will be up to 10 orders of magnitude greater than current third-generation synchrotron light sources."

Nearly all nuclei have a set of nuclear "fingerprints" — several photon-excited states unique to individual isotopes. When a photon with the defined energy hits a targeted nucleus, the photon is absorbed. The excited nucleus then decays, radiating photons of the characteristic energy in all directions. The absorption of resonant photons as well as the emitted energy spectrum can be used to identify the nuclear species or isotope of the target.

The DNDO is funding research to explore this imaging and detection capability. The proposed system, called fluorescence imaging in the nuclear domain with extreme radiation (FINDER), could be used to image the isotopic composition of materials inside well-shielded objects, such as cargo containers moving through an inspection terminal. If successful, a FINDER system based on T-REX technology could provide a solution to the challenge of detecting concealed highly enriched uranium.

Barty added that his team is pursuing dynamic applications for T-REX, such as capturing "isotope snapshots" of the movement of materials with 100-billionth of a second shutter speed.

"It's a new area that may very well have a large impact on the Lab's core national security missions," said Barty.