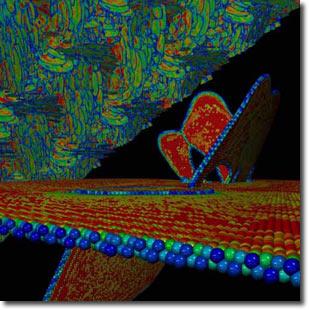 Snapshot from an LLNL molecular dynamics simulation of a ramped shock wave. The simulation includes 256 million atoms, but only defective atoms are shown: there is a dislocation source in the front, and homogeneous nucleation of dislocations in the background.

Studies lead to new understanding of materials at extreme conditions

Plastic deformation of metals results from the motion of a high density of dislocation lines. A strong shock produces an unusual number of dislocations within a metal’s crystalline lattice, which changes the metal’s mechanical properties such as strength, ductility and resistance to fracture and cracking.

In a paper published in the Sept. 17 edition of the journal Nature Materials , Livermore researchers, in conjunction with scientists from the University of Oxford, have compared and validated strong shock molecular dynamics simulations to dynamic experimental data in metals.

"We calculated the time needed for the metal to generate defects and relax in a strong shock wave," said Eduardo Bringa, LLNL’s lead author of the paper. "We came to understand this time interval in terms of the time needed for line defects (dislocations) to move far enough to relax the strain. It was known that the more dislocations that are produced and the more they move, the more the strain is relaxed."

However, the researchers had a surprise: If the dislocations form too rapidly, they become entangled before they can move far enough to relax the strain. In a ramped pressure wave (rather than an abrupt shock), fewer dislocations form, but they are more effective at relieving the strain because they are freer to move.

"Comprehending this kinetic time scale has unified our understanding of how the tremendous transient stresses in shock waves are compatible with our tried and true understanding of material strength in everyday conditions," said Robert Rudd, an LLNL co-author of the paper.

"This provides a powerful tool to explore new regimes in the emerging field of materials science at extreme conditions, such as those expected in experiments planned for NIF," said Bruce Remington, who leads a group developing such experiments for the National Ignition Facility.

A team including several LLNL researchers previously used time-resolved X-ray diffraction to measure the microscopic lattice response and relaxation behind the shock front in a single crystal piece of copper. The shocked copper relaxed in less than one nanosecond and the current simulations reproduce this timescale. Such large-scale simulations were possible, for the first time, due to the extensive computational power of LLNL supercomputers.

Shock compression of condensed matter occurs in a variety of situations including high-speed automobile and aircraft collisions, explosive welding, armor penetration, meteor impacts, interstellar dust dynamics, and inertial confinement fusion. A detailed understanding of the three-dimensional lattice relaxation process during shock compression beyond the elastic limit had not been achieved previously.

"These results will help us understand what to expect during the extreme material deformation experiments, and better design those experiments," Rudd said. "High rate material deformation is important in explosive fragmentation, penetration, collision, and so on, from the prosaic automobile crash, to the kind of penetration scenarios of interest to homeland security."

The Laboratory’s defense-related mission requires an understanding of how metals respond to sudden shock waves and subsequent high-strain-rate deformations. To assess materials properties and performance under extreme deformation conditions, researchers work to understand the fundamental origin of deformation and strength and how the resistance against plastic deformation arises from the collective dynamics of lattice dislocations.

"In our planned materials experiments, we intend to deform a solid-state metal at extraordinary pressures and strain rates," said Remington. "Eduardo has shown us a very promising way for interpreting the results."

Concludes Bringa: "The experiments and simulation combination makes a powerful pair for exploring uncharted even unimagined regimes of material dynamics."