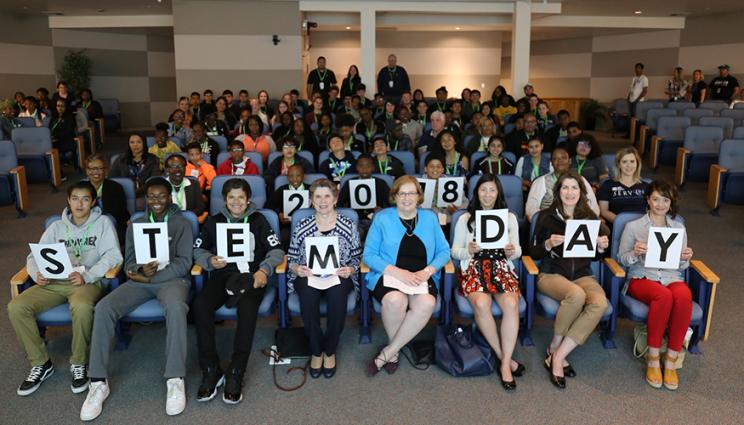 The recent STEM Day at Lawrence Livermore National Laboratory was geared toward getting students excited about how fun science could be as a career path and encourage them to make positive future life and career choices. Photos by Kate Hunts and Carrie Martin/LLNL

Before 13-year-old Elijah Brown started classes at Willie Brown Middle School, he’d had little access to computers and science labs. Led by his natural curiosity about how smartphones worked, he developed an interest in computer coding, a spark he carried to his school in San Francisco, which is focused on science, technology, engineering and mathematics (STEM). See photos.

"The first day of middle school, I learned about robots," Brown said. "It was difficult at first, but I eventually got it. I want to inspire other people who are in a bad situation to do this. I want them to know that instead of going out and buying a game, they can make a game."

Expecting to see "some mind-blowing stuff," Brown was one of more than 250 students from all around the Bay Area who visited Lawrence Livermore National Lab on Thursday for STEM Day at the Laboratory, a daylong interactive event for students from underserved or disadvantaged communities. 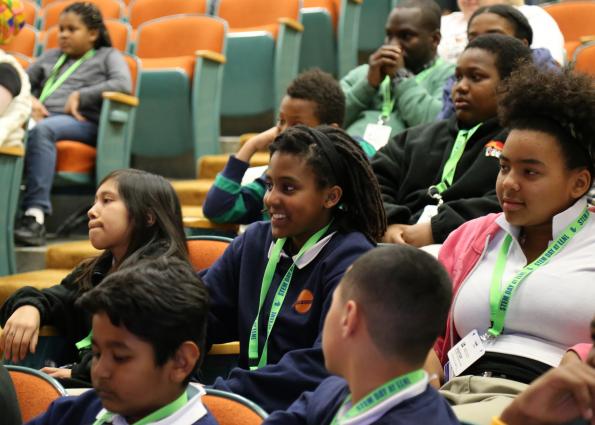 Brown’s teacher, Roson Muhammad, a mentor with the African American Male Achievement program, brought about 30 students from Willie Brown and other schools in the Bay View-Hunters Point area. With a background in biology, Muhammad said he hoped the experience would encourage them to explore careers in STEM, and provide a real-life look at work at a lab.

"It’s about getting students exposure to science and offering them some manhood development," Muhammad said. "Normally, students in this community wouldn’t have access to proper education or even health care."

"I think it’s very important that they get a grasp of technology early on," Griffin said. "I’m hoping they can see where their education can take them, light a little fire under them and allow them to see where they might fit in."

STEM Day at the Lab was geared toward getting students excited about how fun science could be as a career path and encourage them to make positive future life and career choices. In welcoming the students, Andre Sayles, the Department of Energy’s Acting Director of the Office of Economic Impact and Diversity, spoke of how his childhood fascination with how television and radios worked inspired him to seek out STEM at a young age and beyond.

"STEM and education are two of the most important words you can have in your life," Sayles said. "If you go in that direction, you will have plenty of opportunities to go on and do great things in your lives. As a student, I did my best in math and science and I was able to make a difference in the lives of people."

For most of the students, it was the first time they’d visited a national laboratory, or a laboratory of any type. Lauryn Haley, an eighth grader from Montera Middle School in Oakland, said she wasn’t sure what to expect, but was hoping to see some robots.

"I’m more interested in technology and I’d like to code," Haley said. "I heard this was a famous place for technology so I was hoping to see some new things that haven’t come out yet. I think this (experience) will teach me more about science and I’m hoping to learn more."

Visiting LLNL was a new experience for Malik Seneferu, a teacher at Oakland’s Parker Elementary and Middle School. Though his school doesn’t have a science lab, Senefru said his sixth to eighth grade students had been working on science projects, such as building their own water filtration system.

"This is a great opportunity for them to see science up front and be able to experience it," Seneferu said. "I thought it would be a great idea to expose them to the Lab so they could see science in person and be inspired by it. Sports are heavy in school, and I’m trying to get them more into the science behind it, how does the ball move through the air and things like that." 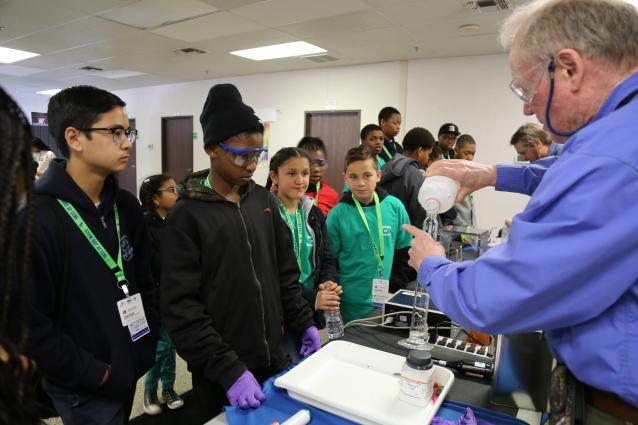 Thursday’s event was the second time that Girls Inc. of West Contra Costa County brought a group to the Lab — about a dozen girls from schools including Richmond’s Manzanita Charter School, Coronado Elementary, Wilson Elementary and Korematsu Middle School in El Cerrito. Girls Inc. member Yasmine Ayers, a seventh grader from Oakland Military Institute, said she wants to someday be a pediatrician and was excited to see how science could apply to a variety of disciplines."I think this program is really going to help kids learn about science and see how important it is in their lives," Ayers said. "Science can help you do a lot of different things."

Girls Inc. of West Contra Costa County’s Executive Director Tiffany Harris said her group has been pushing STEM education because it wants to inspire girls to be strong, smart people.

"We‘re hoping girls pursue STEM careers because there’s only a small percentage of women in that field, and we want them to be open to the opportunity and show them it’s fun," Harris said. "Science is so vast that it will touch them in some way. We want them to have a well-rounded idea of what they can do and how far it can take them."

After their "Fun With Science" experience, the students headed to a building behind the National Ignition Facility for an afternoon of STEM exhibits and hands-on demonstrations, including building Lego robots, 3D animation and gaming, coding, virtual reality tours, additive manufacturing (3D printing), learning about lasers and Raspberry Pi computers. A tour of NIF followed, which was welcome news to seventh grader Nate Holman, also of Willie Brown.

"They say there’s the biggest laser in the world here," Holman said. "My friend said they had a laser that was really big; I didn’t believe it."

Holman’s classmate Jazmine Bailey, also in seventh grade, said she was looking forward to seeing a 3D printer in action. Jayda Love, a 10-year-old at Willie Brown, said she was trying to decide between being a gymnast or a scientist.

"I want to see anything that will spark my mind," Love said. "I love science because there’s so many different things you can do with it. It doesn’t just end with experiments."

Schools from Oakland, San Francisco, Richmond, Bay Point, Tracy, the Mount Diablo area and, for the first time, Livermore, participated in the event. It was also the first visit for Orion Academy in Moraga, a private school for students with autism and nonverbal learning disorders that has instituted a summer internship program with LLNL. Freshman Matthew Bobbitt, 15, said he’s looking forward to interning at the Lab next year, and is leaning toward a career in computer science.

"I was interested to see how everything operates and how people work and get a general idea of what it’s like to work here," Bobbitt said. "Now that I’ve seen it, I love it. I’m even more interested than I was before."

Among the attendees were representatives from the offices of U.S. Congressmen Eric Swalwell and Mark DeSaulnier, as well as David Gibson, director of site operations for Sandia National Laboratories. Tony Baylis, LLNL’s director for the Office of Strategic Diversity and Inclusion Program, and Pat Falcone, the Lab’s deputy director for Science and Technology, welcomed the students, encouraging them to explore and ask questions.

"We are a place of extreme curiosity," Falcone said. "That’s really the business we’re in."

Department of Energy’s Office of Economic Impact and Diversity
Photos