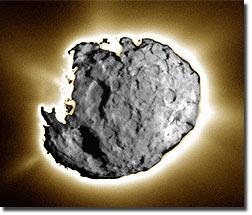 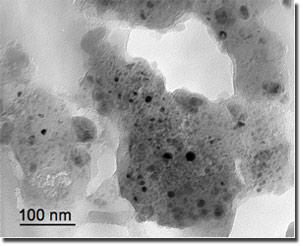 One of the silicate material found in cometary IDPs are GEMS (glass embedded with metals and sulfides). Similar structures are found in Stardust impact tracks in aerogel but also in light gas gun shots of sulfide in aerogel at the Stardust impact speed. [Image credit: John Bradley, LLNL] 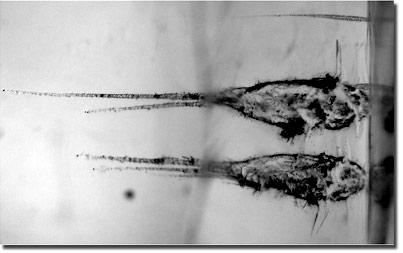 LIVERMORE, Calif. – Contrary to expectations for a small icy body, much of the comet dust returned by the Stardust mission formed very close to the young sun and was altered from the solar system’s early materials.

When the Stardust mission returned to Earth with samples from the comet Wild 2 in 2006, scientists knew the material would provide new clues about the formation of our solar system, but they didn’t know exactly how.

New research by scientists at Lawrence Livermore National Laboratory and collaborators reveals that, in addition to containing material that formed very close to the young sun, the dust from Wild 2 also is missing ingredients that would be expected in comet dust.  Surprisingly, the Wild 2 comet sample better resembles a meteorite from the asteroid belt rather than an ancient, unaltered comet.

Comets are expected to contain large amounts of the most primitive material in the solar system, a treasure trove of stardust from other stars and other ancient materials. But in the case of Wild 2, that simply is not the case.

By comparing the Stardust samples to cometary interplanetary dust particles (CP IDPs), the team found that two silicate materials normally found in cometary IDPs, together with other primitive materials including presolar stardust grains from other stars, have not been found in the abundances that might be expected in a Kuiper Belt comet like Wild 2. The high-speed capture of the Stardust particles may be partly responsible; but extra refractory components that formed in the inner solar nebula within a few astronomical units of the sun, indicate that the Stardust material resembles chondritic meteorites from the asteroid belt.

"The material is a lot less primitive and more altered than materials we have gathered through high altitude capture in our own stratosphere from a variety of comets," said LLNL’s Hope Ishii, lead author of the research that appears in the Jan. 25 edition of the journal, Science . "As a whole, the samples look more asteroidal than cometary."

Because of its tail formed by vaporizing ices, Wild 2 is, by definition, a comet. "It’s a reminder that we can’t make black and white distinctions between asteroids and comets," Ishii said. "There is a continuum between them."

The surprising findings contradict researchers’ initial expectations for a comet that spent most of its life orbiting in the Kuiper Belt, beyond Neptune. In 1974, Wild 2 had a close encounter with Jupiter that placed it into its current orbit much closer to Earth.

Comets formed beyond the so-called frost line where water and other volatiles existed as ices. Because of their setting far from the sun, they have been viewed as a virtual freezer, preserving the original preliminary ingredients of the solar system’s formation 4.6 billion years ago. The Stardust spacecraft traveled a total of seven years to reach Wild 2 and returned to Earth in January 2006 with a cargo of tiny particles for scientist to analyze.

This is one of the first studies to closely compare Stardust particles to CP IDPs. This class of IDPs is believed to contain the most primitive and unaltered fraction of the primordial material from which our planets and other solar system objects formed. They are highly enriched in isotopically anomalous organic and inorganic outer solar nebula materials inherited – through the presolar molecular cloud – from dust produced around other stars. IDPs are gathered in the stratosphere by high altitude airplanes (ER-2s and WB-57s) that are typically more than 50 years old.

The Livermore team specifically searched for two silicate materials in Stardust that are believed to be unique to cometary IDPs: amorphous silicates known as GEMS (glass with embedded metal and sulfides); and sliver-like whiskers of the crystalline silicate enstatite (a rock-forming mineral). Surprisingly, the team found only a single enstatite whisker in the Stardust samples, and it had the wrong crystallographic orientation – a form typical of terrestrial and asteroidal enstatite.

Objects similar to GEMS were found, but Ishii and the team showed they were actually created during the high speed 6-kilometer per second impact of Wild 2 comet dust with the Stardust spacecraft’s collector by making similar material in the laboratory.

"The material found in primitive objects just wasn’t there in the samples," said John Bradley, another LLNL author. "I think this is science in action. It’s really exciting because it’s just not what we expected."

"Wild 2 doesn’t look like what we thought all comets should look like," Ishii said. "The Stardust mission was a real success because without it, we would never have learned these things about our solar system. The sample return was vital for us to continue to unravel how our solar system formed and evolved."

In addition to Ishii and Bradley, other LLNL researchers include Zu Rong Dai, Miaofang Chi and Nigel Browning. Other institutions involved include UC Davis, the Natural History Museum of London, the University of Kent and the Netherlands Organization for Scientific Research (NWO).

Stardust is a part of NASA’s series of Discovery missions and is managed by the Jet Propulsion Laboratory. Stardust launched in February 1999 and set off on three giant loops around the sun. It began collecting interstellar dust in 2000 and met Wild 2 in January 2004, when the spacecraft was slammed by thousands of comet particles including some the size of BBs that could have compromised the mission. It is the first spacecraft to safely make it back to Earth with cometary dust particles in tow.