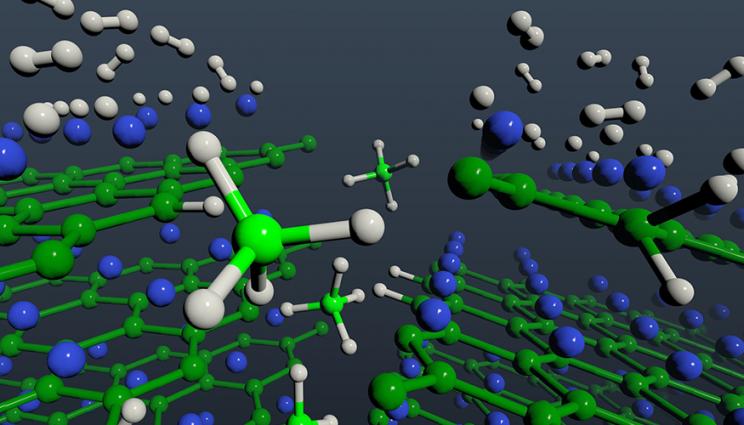 A solid pathway toward hydrogen storage

An inexpensive and useful layered superconductor compound also may be an efficient solid-state material for storing hydrogen. The Department of Energy's (DOE) Energy Materials Network (EMN) consortium approach to accelerate material discovery and development is starting to pay off.

Through theory and experimentation, Lawrence Livermore National Laboratory (LLNL) scientists have discovered the key mechanism by which magnesium diboride (MgB2) absorbs hydrogen and provided key insights into the reaction pathway that converts MgB2 to its highest hydrogen capacity form, magnesium borohydride (Mg(BH4)2). Mg(BH4)2 is a particularly promising hydrogen storage material because of its high hydrogen content and attractive thermodynamics.

"The insights provided by our study are an important step toward unlocking the potential of this material for solid-state hydrogen storage," said Keith Ray, LLNL physicist and lead author of a paper featured on the inside cover of the September issue of Physical Chemistry Chemical Physics.

Storage of hydrogen is one of the critical enabling technologies for hydrogen-fueled transportation systems as well as grid resiliency, energy storage and use of diverse domestic resources across sectors, which can reduce oil dependency.

Hydrogen has a high gravimetric energy density -- fuel cell vehicles on the road today can travel more than 300 miles with 5 kilograms of hydrogen -- and zero pollution from the tailpipe. However, current hydrogen-powered vehicles rely on high-pressure hydrogen storage tanks, which limit infrastructure practicality. Furthermore, the use of 700 bar (700 atmospheres of pressure) H2 gas is inefficient due to compression losses.

In the new study, the team took an important step toward understanding and improving these shortcomings. They found that in the initial stages of hydrogen exposure, MgB2 can hydrogenate to Mg(BH4)2 without the formation of intermediate compounds. Since these intermediates are known to inhibit the speed at which a hydrogen vehicle can be refueled, the possibility of avoiding them is an important development toward making MgB2 practically viable.

"We showed that if you can combine spectroscopy, first principles calculations and kinetic modeling, it’s possible to understand the reaction pathway and specific chemical mechanism in a way that hasn’t been done before," said Tae Wook Heo, LLNL materials scientist and co-author. The research team also discovered that MgB2 hydrogenation occurs in two separate reaction stages as hydrogen molecules split and migrate to exposed edges in the material.

Brandon Wood, the LLNL materials scientist who leads the project, said this research provides a roadmap for integrating experiments and theory toward a more comprehensive understanding of complex reactions in solid-state hydrogen storage materials. The research is part of a broader study of complex metal hydrides being conducted through the Department of Energy’s Hydrogen Storage Materials -- Advanced Research Consortium (HyMARC).

The work was funded by the Office of Energy Efficiency and Renewable Energy, Fuel Cell Technologies Office.