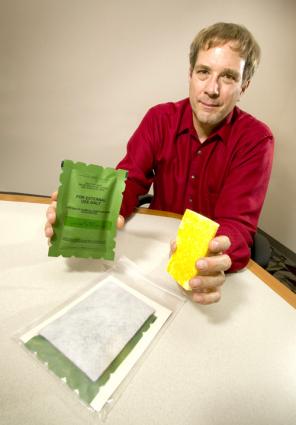 A seven-year LLNL employee, Smith was honored with the Northern California section's Professional Progress Award, receiving a plaque and giving an invited lecture about "Improving the Environment We Share."

"I was delighted to receive the award," Smith said. "It was a privilege to be recognized by my peers and colleagues of many years, and also an opportunity to pass on what I'd learned about the profession to the high school and college students who attended the meeting."

At LLNL, Smith has been instrumental in the development and commercialization efforts for a personal decontamination system for removing chemicals from human skin. He has worked for the three programs of the Global Security Principal Directorate (Z, E and S programs) as well as the Environmental Restoration Division.

Before joining the Laboratory, Smith served as a chemical engineer with the U.S. Army Natick Research and Development Center near Boston for four years, where he assisted in decontaminating nerve agents.

"At ATG, we designed and constructed the first commercial plasma treatment system for cleaning radioactive and hazardous waste from the nation's electrical utilities and Department of Energy sites," Smith said.

The Professional Progress Award was created in 1982 as the premier means for the AIChE's NorCal Section to honor one of its members. The award is given in consideration of sustained and substantial service to the section, recognized personal professional career achievement and significant contributions to the chemical engineering profession.

Smith becomes the third LLNL employee to win the award. Retiree Ravi Upadhye earned the award in 1996 and Diane Spencer won it in 2004.