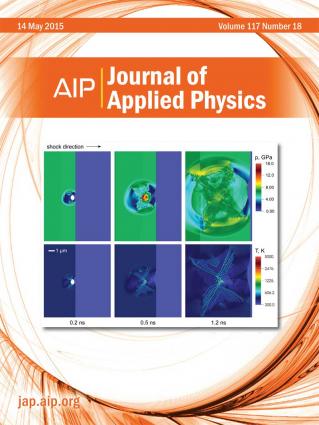 The pressure and temperature fields that are generated when a shock wave collapses a single pore in beta-HMX crystal. The time origin coincides with the arrival of the shock wave at the left-hand side of the pore.

Computer simulations exploring the effects of shock waves on crystalline HMX, performed by Ryan Austin, a staff scientist in Engineering’s Computational Engineering Division, and a team of LLNL researchers, are featured on the cover of the May 14 issue of the Journal of Applied Physics.

The work, funded by the Advanced Simulation and Computing (ASC) program, is part of a broader research project to better understand the safety and performance of high explosives, such as HMX, which are used in the nuclear stockpile and by the Department of Defense (DoD).

"We want to better understand why some explosives are safe and others are less safe," said Larry Fried, Reaction Dynamics group leader in Physical and Life Sciences, noting the difficulty of studying the relevant mechanical, physical and chemical processes experimentally.

Austin said the HMX crystals contain defects in the form of pores or bubbles. When shocked, the pores collapse and form "hot spots," which in turn, can produce small burning regions that propagate in a self-sustained manner. The interaction of burn/pressure fronts from many hot spots is what causes the build-up to detonation.

"From a mechanistic viewpoint, we still don’t understand precisely how these burning reactions are initiated or how the transition to detonation occurs," Austin said.

Austin employed state-of-the-art material models for the simulations "that have put together most of the important physical processes," according to Fried. "This represents a step forward in realism."

The "continuum model" developed for this work is unique because it accounts for the crystal mechanics and temperature-driven decomposition reactions that occur in the hot spots.

A significant finding of the simulations was prominent shear banding (melt cracking) around a collapsing pore -- an effect that is derived from the strength response of the crystal. This behavior is in stark contrast to predictions from conventional strength models, which typically do not account for the anisotropic, viscoplastic nature of crystal deformation. The simulations show that reactions can be initiated within the shear bands (extended hot spots) on a nanosecond (billionth of a second) time scale.

"This indicates that dynamic flow strength is an important consideration in these types of calculations," Fried said.

The simulations were performed on thecomputer cluster named rzzeus and were made possible by coupling ALE3D (a multiphysics hydrocode), Cheetah (a thermochemical code), and mslib (a material strength library).