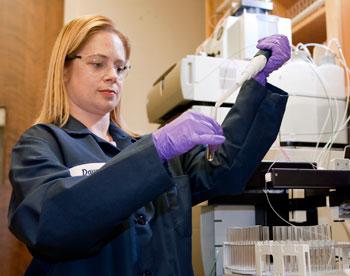 LIVERMORE, Calif. -- When it comes to heavy hitters, Dawn Shaughnessy is one of a few in a league of her own.

As the group leader for experimental nuclear and radiochemistry and the principal investigator for the heavy element group at the Lawrence Livermore National Laboratory, Shaughnessy, along with her team, has discovered six new elements on the periodic table, the heaviest elements found to date.

This and other achievements have earned her a place in the Alameda County Women's Hall of Fame for 2012. She will be honored at 12:30 p.m. Saturday at the 19th annual awards ceremony, set for the Greek Orthodox Cathedral in Oakland.

As one of 11 Alameda County women to be inducted, Shaughnessy will be recognized for her work in science.

She recently led a group in the proposed name of the newest heavy element to be accepted to the periodic table - element 116, which is to be named Livermorium. The name was chosen to honor Lawrence Livermore National Laboratory (LLNL) and the city of Livermore, Calif.

"Nuclear theory states that once you get so far on the periodic table, these newly found elements shouldn't really exist," Shaughnessy said. "But what we've found as we travel down the periodic table is that these elements get more stable the heavier they get, and once an element is stable we can figure out how they can be useful."

In collaboration with scientists in Russia, the team led by Shaughnessy discovered elements 113-118 on the periodic table.

Discovering a new element is no easy feat.  Using an accelerator, chemical isotopes are smashed into a target. Behind the target is a detector where if the chemical isotope melds with the target material, the new element embeds itself in the detector and will radiate. For example, the creation of elements 116 and 114 involved smashing calcium isotopes (with 20 protons each) into a curium target (96 protons) to create element 116 (20 protons of calcium plus 96 protons of curium equals 116). Element 116 decayed almost immediately into element 114.

One of the most difficult things about discovering a new element is that it often lasts for only a few seconds to less than a second so it takes a keen eye to decipher what occurs in the detector. By the time Shaughnessy got to element 114, it lasted long enough (a few seconds) that she was able to do chemistry analysis to watch the decay pattern.

"We're really testing the limits of nuclear and chemical matter," she said. "We're at the extreme end of things. Is there an end to the periodic table? We don't know the answer until we create more elements."

Shaughnessy and her team are working on a method to automate the sample preparation and detection methods so that chemistry measurements will take a minute as opposed to up to five minutes if done by hand. Her team will be able to analyze a single atom at a time. The method will be applicable to other applications from isotope analysis to nuclear forensics.

Shaughnessy was introduced to her career when she received a chemistry set in junior high. Unlike most children who play with the kit for a few weeks and then slowly forget it, Shaughnessy didn't, conducting experiments beyond the basic chemistry the kit included. By the time she got to high school, there wasn't a lot of equipment to do experiments, but that didn't deter her.

Her first chemistry class in college as a freshman led her to become a chemistry major. "I thought nuclear chemistry was the coolest thing ever. To me, it really hit me and was something I really wanted to do."

Out of college, Shaughnessy knew there was really only one place she could go to continue her research in nuclear chemistry: a national laboratory. She chose Lawrence Livermore for a number of reasons, but mainly because "the research is going to help the country."

In addition to her research, Shaughnessy thrives on getting young people interested in science. Her team recently received a $5,000 education grant for their research in discovering element 117, and donated it to the Livermore High School's Chemistry Department. Shaughnessy recalled how ill-equipped her high school chemistry class was and wanted to do something to help her community.

"I've always thought chemistry is the most fascinating science. It's how the universe works stuff. How matter reacts with other matter. How one molecule behaves with another molecule and makes something totally new."