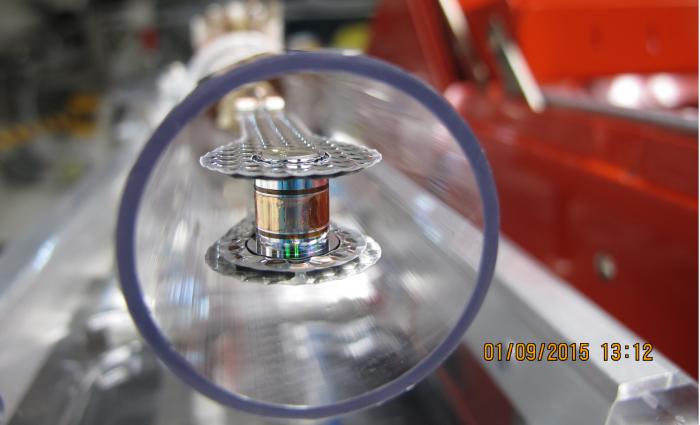 The papers address different aspects of an "adiabat-shaping" experimental campaign, which was performed to controllably assess the effects of ablation-front instability growth vs. fuel adiabat (compression) on implosion performance.

The researchers said this work marks an important step forward in the quest for ignition by demonstrating that ablation-front instability growth can be managed while simultaneously achieving high areal density, a necessary requirement for inertial confinement fusion (ICF) ignition. Furthermore, the results help to implicate ablation-front growth as one of the dominant sources of performance degradation during the National Ignition Campaign (NIC).

The campaign was designed to understand the physics of layered deuterium-tritium (DT) implosions as related to the four-shock low-foot (LF) approach used during the National Ignition Campaign that featured a lower foot, or initial laser picket, in the laser pulse and the three-shock high-foot (HF) approach that featured a higher foot in the laser pulse. The HF was designed to reduce both ablation front instability and capsule convergence ratio that together led to a substantial increase in yield.  The question was how much of the improved performance was due to the lower hydrodynamic instability and how much was from the lower convergence ratio. These experiments were designed to help shed light on this question.

Two new drives were designed for this mini-campaign: a four-shock adiabat-shaped drive derived from the LF drive and a three-shock adiabat-shaped drive derived from the HF drive. Adiabat shaping is based on a strong first shock that decays as it propagates through the shell of the target capsule toward the DT fuel. It sets the ablation front on a higher adiabat (beneficial for stabilization of hydrodynamic instabilities) while keeping the adiabat in the DT fuel at a lower adiabat (needed for high compression). The concept of adiabat shaping was previously proposed and developed in direct-drive ICF experiments at the Omega laser facility (NIF experiments are primarily indirect drive).

"This adiabat-shaped version of the LF showed a three to 10 times improvement in yield compared to similar experiments during the National Ignition Campaign," Casey said, but still lower than the high foot experiments. "This result helps to separate the deleterious impact of ablation front growth from convergence on implosions during the NIC and supports the hypothesis that seeds at the ablation front—for example, the capsule support tent— played a significant role in limiting (implosion) performance."

Since the NIC, researchers have learned that the "tent" that supports the capsule inside the hohlraum seeded a large perturbation that was amplified by ablation front instability and was likely the dominant factor degrading the performance of NIC capsules. Reducing this with high foot was an important factor in improving performance.

"The fuel areal density was improved by approximately 25 percent with this new drive compared to similar high-foot implosions," Smalyuk said, although in this case neutron yield remained comparable to the high foot experiments rather than increasing. A leading hypothesis is that asymmetry in the X-ray drive from the hohlraum currently prevents increases in performance that might otherwise be expected from increased fuel areal density or equivalently, convergence ratio. Improving the hohlraum drive symmetry is now a major focus of the program.