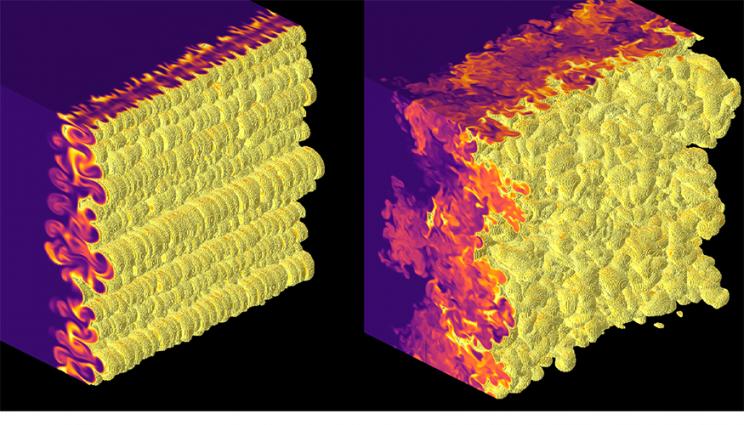 Visualizations of a simulated high-energy-density mixing layer before reshock (left) and after reshock (right).

In ICF, instabilities at the interface between two plasmas of different densities can lead to mixing and turbulence, which can degrade capsule performance. These phenomena have been studied for decades at LLNL and elsewhere. A long-standing challenge has been to understand how instabilities, mixing and turbulence at high-energy-density (HED) conditions – like those encountered in ICF – are similar to or different from those at non-HED conditions. The term HED refers to thermodynamic pressures greater than 1 Mbar.

In a new paper in the Journal of Fluid Mechanics, a major computational study of shock-induced instability growth and mixing at HED conditions is presented. Jason Bender, LLNL physicist and lead author of the study, said the research is the first of its kind, explicitly focused on using three-dimensional radiation hydrodynamics simulations to quantify how HED mixing is similar to or different from non-HED mixing. The simulations are consistent with experimental data from eight shots fired at the National Ignition Facility (NIF) as part of the Reshock Campaign.

“We calculate that the impact of a second shock or 'reshock' on the HED mixing layers increases turbulent kinetic energy by over one order of magnitude, similar to what has been found in non-HED scenarios,” he explained. “Conversely, we highlight two trends that are unique to the HED regime. First, we show that, during reshock, the generation of vorticity – a key quantity in fluid mechanics – includes a substantial contribution associated with dilatation.”

This finding highlights the importance of plasma compressibility and it challenges a conventional assumption that vorticity generation in flows with Rayleigh-Taylor and Richtmyer-Meshkov instabilities is mainly due to baroclinic production. Second, the research shows that the mechanism of free-electron thermal conduction significantly softens local density gradients in the mixing layers, which causes a minor but non-negligible decrease in mixing relative to a flow without this mechanism. The role of free-electron thermal conduction in transporting energy in ICF is well known. However, no previous study has specifically isolated and quantified its role in HED shock-induced mixing.

Bender said the new study required the talents and expertise of a multidisciplinary team of LLNL scientists, including theorists, experimentalists, designers and computational scientists. The simulations demanded more than 2.9 million core-hours on Livermore Computing resources. The study takes a computational science approach, meaning that it draws conclusions that could not be reached via theory or experiments alone. The team leveraged many computational models and simulation capabilities that were only developed within the last decade.

Bender also said the paper sheds light on fundamental physical processes in ICF and astrophysics. In particular, it will inform models of mixing and turbulence that are used to help design ICF capsules and understand their performance.

“The study was driven by a strong educational motivation,” he said. “The paper was written to be a comprehensive guide to modern simulation of HED instability growth and mixing, accessible both to ICF scientists and to experts in traditional non-HED fluid mechanics. All governing equations and key physical models are documented and described with citations to more than 140 references.”

Bender said many open questions remain about instability growth and mixing at the extreme conditions seen in ICF and astrophysics. Various experimental and modeling efforts (supported by many of the authors) are ongoing to address these questions. Forthcoming developments at LLNL, such as higher-resolution X-ray radiography at NIF and simulation codes with higher-order numerical discretization schemes, will help pave the way to exciting new discoveries in HED fluid mechanics.

The study originated as part of the Reshock Campaign at NIF. Originally conceived and developed by Raman and Stephan MacLaren in 2014, the Reshock Campaign produced an HED analogue of non-HED experiments on the Richtmyer-Meshkov instability, to inform model development for ICF research. With the efforts of lead experimentalists Huntington and Nagel, lead designers Raman and Bender and many others, the Reshock Campaign fired dozens of NIF shots between 2014 and 2020. Previous publications include  Nagel et al., Physics of Plasmas, Ping Wang et al., Journal of Fluids Engineering, and Huntington et al., High Energy Density Physics.

The study was supported by various HED and ICF research programs in multiple LLNL directorates.