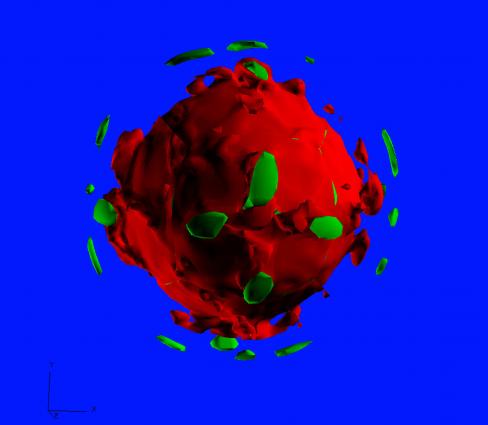 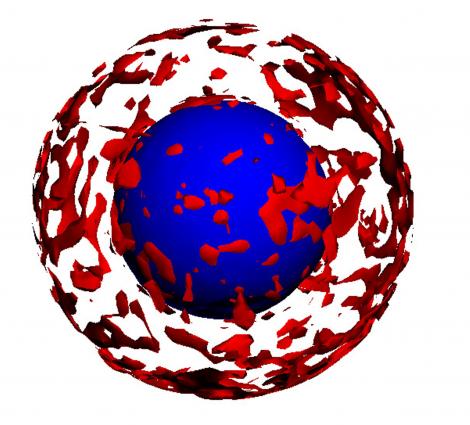 Deep in the interior of a red giant star, hydrogen rich clouds (red) are seen to float above the hydrogen burning shell (blue).

LIVERMORE, Calif. – Using 3D models run on some of the fastest computers in the world, Laboratory physicists have created a mathematical code that cracks a mystery surrounding stellar evolution.

For years, physicists have theorized that low-mass stars (about one to two times the size of our sun) produce great amounts of helium 3 (³He). When they exhaust the hydrogen in their cores to become red giants, most of their makeup is ejected, substantially enriching the universe in this light isotope of helium.

This enrichment conflicts with the Big Bang predictions. Scientists theorized that stars destroy this ³He by assuming that nearly all stars were rapidly rotating, but even this failed to bring the evolution results into agreement with the Big Bang.

Now, by modeling a red giant with a fully 3D hydrodynamic code, LLNL researchers identified the mechanism of how and where low-mass stars destroy the ³He that they produce during evolution.

They found that ³He burning in a region just outside of the helium core, previously thought to be stable, creates conditions that drive this newly discovered mixing mechanism.

Bubbles of material, slightly enriched in hydrogen and substantially depleted in ³He, float to the surface of the star and are replaced by ³He-rich material for additional burning.  In this way the stars destroy their excess ³He, without assuming any additional conditions (like rapid rotation).

"This confirms how elements evolved in the universe and makes it consistent with the Big Bang," said David Dearborn, a Lawrence Livermore National Laboratory physicist. "The previous one-dimensional model did not recognize the instability created by burning ³He."

The same process applies to low-mass metal poor suns, which may have been more important than metal-rich stars like the sun throughout the earlier part of galactic history in determining the ³He abundance of the interstellar medium.

The research appears in the Oct. 26 edition of Science Express .

The Big Bang is the scientific theory of how the universe emerged from a tremendously dense and hot state about 13.7 billion years ago.

The Big Bang produced about 10 percent 4He, .001 percent ³He with almost the rest made up of hydrogen.

Later, low mass stars should have increased that ³He production to .01 percent. However, observations of ³He in the interstellar medium show that it remains at .001 percent. So where did that ³He go?

That’s where the Livermore team comes in. Livermore scientists Peter Eggleton and Dearborn collaborated with John Lattanzio of the Centre for Stellar and Planetary Astrophysics in Australia to create a code that describes how ³He burns during star formation so that the makeup of the universe after the Big Bang is reconciled.

"Prior to our work, it was perceived that the ³He in the envelope was largely indestructible, and would be blown off later into space, thus enriching the interstellar medium and causing the conflict with the Big Bang," said Eggleton, an astrophysicist and lead author of the paper. "What we find is that ³He is unexpectedly destructible, by a mixing process driven by a phenomenon that has been ignored so far."

Science Express
Djehuty: a new 3-D code for the first time simulates the structure and evolutio…
Big&#160;Bang cosmology primer
Evolution of hydrogen rich clouds from H3 to H4
Development of a contour: 6,000 seconds of evolution