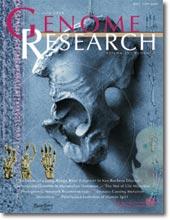 The cover of the July issue of Genome Research illustrates a hipbone with increased bone mass and limb abnormalities in transgenic mice. These skeletal anomalies are caused by misregulation of the human SOST gene.

Researchers track down cause of a disfiguring bone disease

LIVERMORE, Calif. — Scientists have tracked down the biological trigger that gives rise to Van Buchem disease, a hereditary, disfiguring bone disorder that can cause blindness and deafness. The findings provide insight into long-range gene regulation and could lead to new treatments for osteoporosis and other crippling bone disorders.

A research team from Lawrence Livermore and Lawrence Berkeley national laboratories, the Novartis Institutes for BioMedical Research in Switzerland, and the DOE Joint Genome Institute in Walnut Creek, Calif., characterized a human mutation associated with the malfunctioning of the sclerostin , or SOST , gene, and showed that it plays a key role in regulating bone formation. The culprit is a regulatory element in a missing 52,000-base-pair stretch of DNA that normally directs the SOST gene to produce a protein that maintains control of bone formation rates. Without this regulator, bone production goes up, progressively increasing bone density, or osteosclerosis.

The effect primarily occurs in the skull and lower jaw of Van Buchem patients, causing facial distortions and pinching cranial nerves, which can lead to deafness and blindness. Collarbones, ribs and long bones can also be affected.

The research team, led by Gabriela Loots of Livermore’s Genome Biology Division, reports its findings today in the online version of the journal Genome Research .

Noncoding DNA segments – long stretches of DNA that do not code for proteins and were once thought to have no biological function – are now being found to contain regions that play a key role in switching distant genes on and off. Today’s study is one of the first to pinpoint a disease-associated mutation that alters one of these long-range regulatory elements.

"Our study addresses a fundamental issue with regard to the majority of the human genome that is noncoding in nature, and its potential impact on human health," Loots said. "Noncoding regions located far away from the genes they regulate are critical for normal gene expression and are capable of leading to dramatic abnormal phenotypes (individual characteristics, such as diseases or defects) if altered or deleted."

To investigate the misregulation of the SOST gene, Loots and her colleagues genetically engineered a copy of the DNA segment containing the gene and used it to generate mice with and without the 52,000-base-pair region missing in Van Buchem patients. The deleted region is located about 35,000 base pairs "downstream" from SOST on human chromosome 17. While they found no difference in the activity of the SOST gene in early mouse embryos, the gene was dramatically "down-regulated," or less active, in adult mice carrying the deleted region than in the normal mice.

The findings are strong evidence that "the (Van Buchem) noncoding deletion removes a SOST -specific regulatory element," the team reported, indicating that the disease is caused by the absence of one or more distant enhancer elements in the deleted region that help direct the expression of the SOST gene in adult humans.

In an effort to locate the specific enhancer sequence responsible for SOST regulation, the team compared human and mouse DNA and found seven common segments within the 140,000-base-pair SOST region. Scientists assume that DNA segments that have been "conserved" from one organism to another during evolution play a biological role, or they would have been discarded as organisms evolved. By introducing the conserved segments into cells similar to osteoblasts (bone-forming cells), the team found that a 250-base-pair conserved region named ECR5 was able to drive SOST expression.

"This study represents a clear and unambiguous case in which altering noncoding genomic content has a deleterious impact on gene expression," the team reported, "demonstrating that mutations in distant regulatory elements are able to cause congenital abnormalities analogous to coding (gene) mutations."

"Human genetic diseases of the skeleton such as sclerosteosis and Van Buchem disease provide a starting point for understanding the modulation of anabolic bone formation," noted team members Michaela Kneissel and Hansjoerg Keller of Novartis, "and ultimately have the potential to identify key molecular components that can be used as new therapeutic agents to treat individuals suffering from bone loss disorders" such as osteoporosis. "Therefore the findings stemming from this collaboration, along with the mouse models created, have clinical relevance in addition to addressing a fundamental problem in genomics."

Working with Loots on the study were Jessie Chang and Nicole Collette of Lawrence Livermore, Dmitriy Ovcharenko and Ingrid Plajzer-Frick of Lawrence Berkeley, Eddy Rubin of Lawrence Berkeley and the DOE Joint Genome Institute, and Kneissel, Keller and Myma Baptist of Novartis. Funding for the research was provided by the U.S. Department of Energy’s Office of Science and by the National Institutes of Health.